Banehallow, the Lycan, is a melee strength hero who is capable of immense physical damage and considerable movement speed, who also excels at pushing buildings and bolstering his team's damage and health. He is capable of summoning Wolves who make excellent sources of damage and objective control. His Howl gives a large reduction in attack damage and armor to his enemies, while Feral Impulse turns Lycan and his pack into prime fighters on their own with bonus attack damage and health regeneration. When the time is right, Shapeshift allows the Lycan himself to join in the hunt, overwhelming foes with deadly critical strikes and incredible movement speed.

Banehallow, the Lycan
▶️ "Wolves need no armor."
Lore:
Banehallow was noble-born to the house of Ambry, the greatest of the landed castes in the old kingdom of Slom. Before the Fall, as the King's wants grew strange, and his court grew crowded with sorcerers and charlatans, the house of Ambry was the first to rise against the avarice of the throne. No longer willing to pay homage and fealty, they instead sent six-thousand swords into the capital, where they were wiped out in the Massacre of the Apostates. And then came the teeth behind the old truth: When you strike a king's neck, you had better take his head. Enraged by the betrayal, the king exterminated the vast Ambry bloodline, sparing only the lord of the house and his youngest son, Banehallow. Before all the royal court, with the disgraced lord chained to the ornate marble floor, the King bade his magicians transform the boy into a wolf so that he might tear out his own father's throat. "Do this," the king said, "so that Lord Ambry will understand the bite of betrayal." Powerful magic was invoked, and the child was transformed. But though his body was changed, his spirit remained intact, and instead of biting the exposed neck of his father, he attacked his handlers, tearing them to pieces. A dozen of the King's knights perished under the wolf's teeth before they managed to drive it off into the night. Lord Ambry laughed from his chains even as the King ran him through with a sword. Now the heir to the lost house of Ambry, Banehallow wanders the trail as the Lycan, part warrior, part wolf, in search of justice for all that he lost.
Voice:
Nolan North (Responses) 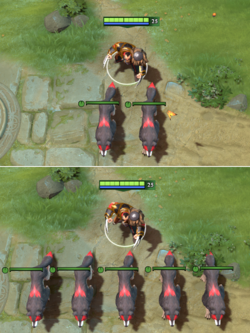 145
The very enchantment that twisted his being also summons canine familiars.

Howl: Dispellable with any dispel.
Blood-curdling wolf cries signal to opponents that Banehallow is among them.

Ability
Aura
Affects
Self
Increases the HP regeneration and damage of Lycan and all units under his control.
Radius: 1200
Attack Damage Bonus: 14%/26%/38%/50% (

Ability
No Target
Affects
Self
Lycan assumes his lupine form, granting him and his units critical strikes and added vision at night. During Shapeshift, Lycan and all units under his control move at increased speed, cannot be slowed and have a 40% chance to deal a critical strike doing 150%/175%/200% damage.
Cast Animation: 0+0
Transformation Time: 1.25
Night Vision Bonus: 1000
Haste Speed: 650
Critical Chance: 40% (

Illusions get their own Shapeshift buff lasting its regular duration. Illusions benefit from the aura's effects (movement speed and critical strike), but do not bestow it. Red critical numbers are before illusion and armor reduction. Illusions gain the night vision as well.
Modifiers

Shapeshift Speed: Undispellable.
Forever a slave to his lycanthropy, Banehallow has come to accept his curse, and embrace his own savagery.

Ability
Target Unit
Affects
Allied Heroes
Lycan bites an ally, granting them Shapeshift properties. Lycan and the bitten target gain 30% Lifesteal and share Lifesteal with each other as long as they are within 1200 range of each other.
Cast Animation: 0.3+0.73
Lifesteal Radius: 1200
Lifesteal: 30%
Shared Lifesteal: 30%

Illusions get their own Shapeshift buff lasting its regular duration. Illusions benefit from the aura's effects (movement speed and critical strike), but do not bestow it. Red critical numbers are before illusion and armor reduction. Illusions gain the night vision as well.
Modifiers