Abilities are unique skills that heroes and creeps have access to on the battlefield. They range from simple passive effects, to devastating explosions of energy, to complex, terrain changing feats. All heroes have four or more abilities, three or more basic abilities and an ultimate ability, that they can assign ability points to every time they level up. Every level in an ability makes it more powerful, sometimes increasing its mana cost as well.

Abilities can consume mana, and may also be placed on cooldown when used. Abilities that are on cooldown cannot be used until their cooldown timer is up, at which point they can be cast again. Abilities with low cooldowns are sometimes referred to as "spammable" abilities, because they can be used very frequently.

Every time a hero levels up, they earn an ability point, until their abilities are fully upgraded. The player can then spend the point to unlock one of the hero's abilities, or to upgrade an already learned ability. At the start of the game, all of a hero's abilities are locked, but they each start with one ability point which can be used at any time. Abilities cannot be used and do not have any effect if they are still locked. After an ability is unlocked, it can be upgraded several times. Basic abilities can be upgraded 3 more times, for a total of 4 levels, and a hero's ultimate ability can be upgraded 2 times, for a total of 3 levels.
The exception to this is Invoker, who can upgrade his basic abilities 6 times (total of 7 levels).

Upgrading abilities will make them more effective. Depending on the ability, upgrading the spell may increase the amount of damage, increase the duration of an ongoing effect such as a disable, or otherwise improve the ability.

Sometimes, upgrading abilities will also increase or decrease the mana cost. For example, each level in Earthshaker's

Fissure increases the damage it deals and the duration of its stun, but also increases its mana cost.

Besides directly leveling abilities, there are a few other ways to make abilities more powerful. Spell Amplification is a mechanic which increases the amount of damage of abilities slightly.

Aghanim's Scepter is a special item which can enhance each hero in a unique way. Depending on the hero, it may enhance the power of their ultimate ability, improve one or more basic abilities, or in some cases, Aghanim's Scepter even grants an entire new ability.

Some heroes also have an ability which improves their other abilities further. For example, Ogre Magi's

A hero's last ability, which can usually be trained at level 6, level 12, and level 18, is called an ultimate. There is only one exception to this level restriction: Meepo's

Ultimates can be high-impact abilities that define a hero's strengths and playstyle; they often have a devastating effect and a long cooldown. In some cases however, they are not the main strength, but just synergize very well when combined with the other abilities. Some ultimates have a lower effect but are spammable due to a relatively short cooldown. Ultimate abilities can also be passive abilities.

Ultimates, unlike normal abilities, are usually able to target a unit under a spell immunity effect, such as Black King Bar. They will rarely damage such a unit, but other effects such as slows or stun will usually apply. This makes ultimates, especially those with stun effects, incredibly powerful, since enemy heroes cannot block the effects.

Many abilities come together with sub-abilities. These extra abilities usually do nothing on their own and mostly are only active after the spell they come with was cast first, or in some cases, they serve as a set-up for other spells. Their tasks range from activating the effects of other abilities on demand, manipulate abilities or even fully cancel them when desired. Usually, these abilities are innate, or are unlocked after learning specific spells. Since these abilities usually have a very low or no cooldown at all, they usually do not trigger abilities which react on ability usage, like Magic Wand's charge gain or Arcane Curse's spell cast penalty.

Some abilities (basic and ultimate abilities) do not use the cooldown system, but instead have a number of charges and no cooldown. Each cast of such a spell consumes one of its charges, which then replenishes over time.

An ability's type refers to how that ability's effects are applied.

For abilities listed by their ability and targeting type, see here.

Active abilities must be used in order to apply their effects. Active abilities can consume mana, have cooldowns, and usually have some method of targeting related to them. The majority of abilities are active abilities. They can be activated by pressing their associated hotkey. If an ability can target the caster, double tapping the hotkey causes them to activate immediately on the caster.

Active abilities are indicated by a bevel around the icon, which makes them look like a button. When an ability gets used and enters its cast animation, the bevel turns green and the icon shifts, looking like a pressed button. When selecting a targeted ability, the icon and the bevel appear brighter until the ability gets deselected or the cast begins. Active abilities also have a hotkey displayed at the top left corner.

Passive abilities apply their effects either permanently as soon as they are learned, or activate by themselves if the ability is learned and its requirements met. These requirements can range from attacking a unit, casting a spell or even getting attacked. Most passive abilities do not consume mana and usually do not have cooldowns, exceptions include Wraith King's

Reincarnation. Most heroes have at least one passive ability, though not all do.

Autocast abilities are special active abilities that can be toggled on or off, or manually cast. Right click an ability to toggle autocasting on or off. Disables such as silences and stuns do not prevent a unit from toggling its autocast abilities on or off. However, autocast abilities cannot be used when silenced as with all other spells. Most auto-castable spells are active attack modifiers, applying a modification to the user's attacks when activated. When toggled on, the ability will apply whenever possible. For example, Drow Ranger's

Frost Arrows will be used whenever she attacks a target. When toggled off, they will not be used and will not consume mana. When an active attack modifier is manually cast, it is partially treated as a spell cast instead of as an attack. This causes nearby enemy creeps to not aggro when using them that way. This is also known as orb walking.
Not all abilities with autocast are attack modifiers. A few of them are regular abilities, which, when toggled on, will automatically be cast when their requirements are met. An example of such is Ogre Magi's

Bloodlust. When toggled on, Ogre Magi will automatically cast Bloodlust on nearby allied heroes.

Auto-castable abilities have almost the same appearance as regular active abilities. They also have a bevel which turns white when selected and green when casting. However, they do not turn green for attack modifiers. On top of that, they have a thicker second bevel behind the first bevel. This one glows orange when the ability gets set to autocast.

These are the only auto-castable active attack modifiers:

And these are the only auto-castable active abilities:

Active abilities and autocast abilities are targeted in different ways, depending on the effects of the ability.

Toggle abilities are always non-targetable. These abilities apply a periodic effect and often drain mana or health as long as they are toggled on. These effects can range from damaging or healing nearby allies, to switch between attack types, and to manipulate other abilities of the unit. If the toggle ability drains mana over time, it turns itself off once not having mana to support it anymore. They cannot be forcibly turned off by anyone but the player by pressing their button again, or by dying. Like regular spells, they cannot be used (in this case, turned on or off) while affected by disables which prevent ability usage. However, once they are toggled on, they persist through any form of disable, including silence. 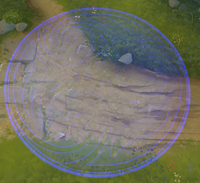 Point target abilities require the caster to target a point or an area. Upon pressing such a spell's button, the cursor turns into a crosshair that determines where the ability will be cast, or in which direction it will be cast. Point targeting abilities can have very varying effects. For some spells, it merely determines the direction to launch an effect, for other spells it determines an exact point where an effect will be applied.

Area target abilities work like point target abilities, with the only difference being that they require the caster to target a whole area, instead of a point. Upon pressing such a spell's button, the cursor turns into a targeted area indicator which shows the area the ability will affect. Upon cast, these abilities usually affect the whole targeted area, or all units in the area. Some apply their effects once upon cast, and some apply a lasting effect which affects units which enter the area after cast.

The following abilities use vector targeting

Unit target abilities require the caster to directly target a unit, and cannot be used on the ground. Upon pressing such a spell's button, the cursor turns into a crosshair that determines on which unit the ability will be cast. Most unit targeted abilities affect only the target. Abilities that apply their effect to a single unit are often called "single target spells". When targeting a unit which is out of cast range, the caster follows the unit until it gets in cast range or cannot be targeted anymore (e.g. the target turns invisible). 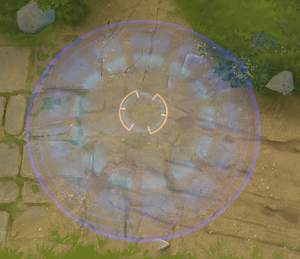 Some of the targeting types can appear combined.

Some point targeted abilities may also be able to directly target a unit. In such cases, the spell is cast towards the targeted unit's current location. If the target unit is out of cast range, the caster follows it until it is within range and casts the spell on the unit's position. Even when the target moves during the cast animation, the spell is still cast on it, or launched towards it if it is a traveling effect. This does not cause the spell's actual effects to home in on the target.

A small number of spells react on abilities being cast, meaning they trigger certain effects when affected units cast abilities. Abilities reacting on spell casts are:

For balance reasons, the following abilities do not trigger any on-cast event:

There is one sub-ability and one active attack modifier which do trigger on-cast events. Whether they are intended to do so or not is unknown. This includes the following: