Ymir, the Tusk, is a melee strength hero whose array of icy disables makes him a very strong team initiator and ganker. He has a damage nuke and a disable in Ice Shards, which lets him precisely place a barrier in an enemy's path, inhibiting their movement and blocking off their escape path. Should his teammates need help closing the distance to enemies, Tusk can assist them with Snowball, which surrounds Tusk and any nearby allies in a protective shell of snow as he rolls at a target enemy, damaging and stunning everything in its path. Once in a fight, Tusk also has the ability to Tag Team, which allows all nearby allies to slow enemies they attack with physical damage. His ultimate, Walrus PUNCH!, sends a target enemy flying with a mighty uppercut, stunning and disabling them while dealing a critical strike and slowing them upon landing for a moderate amount of time. A strong initiator and powerful brawler, the Terror from the Barrier should never be bet against in a fight, as he can put his foes down for the count with his unique assortment of spells and disables.

Ymir, the Tusk
▶️ "After a bar brawl it's customary, as a courtesy, to buy everyone who's still standing a round of drinks."
Lore:
It had been a brawl to remember. There stood Ymir, the Tusk, the Terror from the Barrier, the Snowball from Cobalt, the only fighter to have bested the Bristled Bruiser in a fair fight, and now the last man standing in Wolfsden Tavern. What started as a simple bar bet of supremacy ended with four regulars, a blacksmith, and six of the Frost Brigade's best soldiers writhing against the shards and splinters of almost every bottle, mug, and chair in the building. The Tusk boasted and toasted his victory as he emptied his brew. No sooner had the defeated regained consciousness than the cries for double-or-nothing rang out. The Tusk was pleased at the prospect, but none could think of a bet bigger than the one he just conquered. Horrified at the damage to his tavern and desperate to avoid another brawl, the barkeep had an idea. As skilled as he was, Ymir had never taken part in a real battle, never tested himself against the indiscriminate death and chaos of war. He proposed a wager to the fighter: seek out the biggest battle he could find, survive, and win it for whichever side he chose. The stakes? The next round of drinks.
Voice:
Tom Chantler (Responses)

modifier_tusk_ice_shard: Undispellable. Persists death.
In the frozen tundra near the Barrier, after the last sun of autumn has set, ice can form with alarming speed. 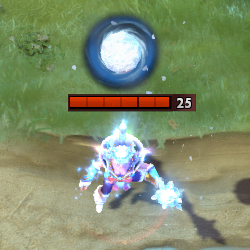 Visual indicator above the target.
Snowball

Ability
Target Unit
Affects
Allies / Enemies
Damage
Magical
Tusk begins rolling into a snowball. Allies within a 350 radius can also be added to the snowball by right-clicking on them, even while the snowball is moving. Once launched, any enemies caught in the snowball's path will be stunned and take damage. Each allied Hero in the snowball will add to its damage.
Cast Animation: 0.1+0.5
Cast Range: 1250
Damage & Stun Radius: 200
Radius Increase per Second: 40
Gather Radius: 350
Max Stationary Time: 3
Max Chase Duration: 3
Base Damage: 80/120/160/200 (

modifier_tusk_snowball_movement: Dispellable with death only.

modifier_tusk_snowball_movement_friendly: Dispellable with death only.

modifier_tusk_snowball_visible: Dispellable with any dispel.

modifier_stunned: Dispellable with strong dispels.
Tales are still told of the wild feat that ended the grand brawl at White Fields.

Ability
No Target
Launch the snowball toward the target.
Cast Animation: 0+0

0
Into the great wide white!

Slow persists if debuff was placed before spell immunity.
Modifiers

modifier_tusk_tag_team_aura: Dispellable with death only.

modifier_tusk_tag_team_slow: Dispellable with any dispel.
Even far from Cobalt, Tusk carries the 'Barrier Chill' in his very bones.

modifier_tusk_walrus_kick_air_time: Dispellable with death only.

modifier_tusk_walrus_kick_slow: Dispellable with any dispel.
Tusk may have made his name with his fists, but the wise enemy is wary of any and all limbs.

Slow persists if debuff was placed before spell immunity.
Modifiers

modifier_tusk_frozen_sigil: Dispellable with death only.
The chill of home!

Ability
Target Unit / Autocast
Affects
Enemies
Tusk connects with his mighty Walrus Punch, a critical strike so powerful it launches its victim into the air. The victim is slowed upon landing.
Proc Chance on Attack: 0 (

The passive proc chance from the talent is not disabled.
Modifiers

Frozen Sigil
Summons a mobile flying ward that provides an aura which slows nearby enemies' movement and attack speeds.

Snowball. The slow is provided by an aura, the debuff lingers for 0.5 seconds.