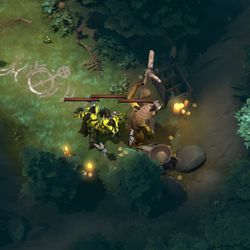 Ability
No Target
The Dark Troll Summoner stirs the ground underfoot, raising the remains of trolls long dead, bringing to life two Skeleton Warriors who will fight at his side.
Cast Animation: 0.3+1.2
Corpse Search Radius: 600
Number of Skeletons: 2
Duration: 40

This is how much gold and experience the camp will provide (without skeletons), accounting for the 2% increase of the base bounty every 7 minute and 30 seconds.