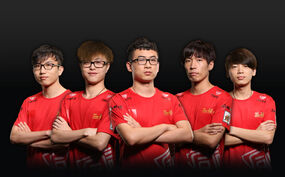 SanSheng, Hao, Banana, KingJ, and Mu at The International 2013.

TongFu is a Chinese eSports Organization.

TongFu was formed in the middle of 2011 led by former TyLoo player Kabu. However, their only achievement that year was placing 3rd in Wuhan Tiandi E-sports Cup.

In 2012, after several reformations, former EHOME player LaNm ended up in TongFu; Followed by 3 core players from the already disbanded PanDarea Gaming roster. However, a controversy was sparked as LaNm insisted on transferring to EHOME afterwards as the conflict was eventually solved through a transfer fee given from EHOME. Awoke was chosen as LaNm's replacement. TongFu managed to qualify for The International 2012 through the East Qualifier.

In October 2013, TongFu picked up Team Adidas, an amateur team participating in the ACE Dota 2 League. This squad was named TongFu.WanZhou. Later that month, they picked up a third squad, consisting of SYDM, LongDD, Kabu, YaphetS, and zExBinGo.[5][6]

In February 2014, Zhou decided to retire from professional Dota.[8][9]

After losing several players to NewBee, TongFu decided to focus on the amateur Dota scene.

Beginning with September 2014 TongFu announced the formation of the team TongFu.OB (Old Boys) which consists of retired veteran players who are now mostly playing the game for fun rather than competitive gaming. TongFu.WhanZhou is still intended to serve as the main squad.[10]

In February 2015, the team announces a North American division.[11]

In March, TongFu announced a new set of rosters.[12]