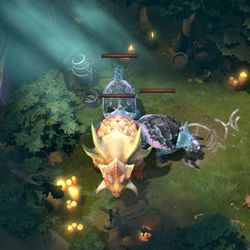 The Thunderhide camp is an ancient camp of neutral creeps. It contains 1 Ancient Thunderhide and 2 Ancient Rumblehides, and gives a total of 314 experience and 152-173 gold.

War Drums Aura
The rhythm of the Thunderhide's heartbeat increases the attack speed and attack damage of nearby allies.