The Underhollow is a system of tunnels, deep below Roshan's lair.[1] Its maze-like rooms are home to powerful denizens, and wheels of the world's rarest cheese, Roshefort.

Noticing the cheese, Roshan the Immortal followed in quickly behind the heroes, leaving them trapped in the labyrinth, scrambling to find that wheel of cheese before Roshan can.

The subterranean labyrinth is studded with giant green crystals and cubic formations of bismuth. Small pools of water can be found near patches of lichen, where pale axolotls live. Geodes are also seen throughout the caverns. Large mushrooms and schizophyllum grow throughout the Underhollow, and its overall ecology is similar to that of The Emerald Abyss, suggesting the two locations are close.[2] 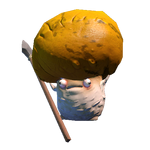 Various races inhabit the tunnels of the Underhollow, the most common being the Mushlings. They live on the edges of the stone walls, hunting beetles and axolotls. Industrious teams of Eimermoles dig through the tunnels, and a single Lost Meepo roams the grounds, selling trinkets to adventurous intruders. These or previous inhabitants have constructed gates between rooms, as well as a diamond-shaped altar in the middle of the cavern.[3]

News of Roshefort, a rare and valuable cheese found only in the Underhollow, quickly spread to the surface world. Heroes flocked to The Underhollow, battling one another for the chance of finding a coveted wheel of cheese. Roshan, seeking the Rochefort for himself, rampages throughout the tunnels, trampling adventurers and triggering cave-ins.[4]