The International 2015 was the fifth iteration of Dota 2's flagship annual championship. Hosted by Valve Corporation, it took place at the KeyArena Center in Seattle, Washington. The tournament began on 16 May 2015 with the Open Qualifiers and closed on 8 August 2015 with the Grand Final, where

CDEC Gaming. The 2015 edition of The International featured sixteen Dota 2 professional teams from all over the world.

With a prize pool of over US$18 million, The International 2015 is the second-largest tournament to ever take place in eSports, breaking the record held by its previous iteration, The International 2014, which accumulated U$10.93 million.[1] The majority of this sum is collected through several in-game items released by Valve, including The International Compendium 2015, a digital book tied to the event that came with many activities and cosmetic items. |icon=File:TheInternationalSmall.png

Alliance was unable to qualify for the event. 2012 and 2014 champions

Newbee were directly invited to participate, whereas 2011 champion

Natus Vincere earned their spot through the European Qualifiers. The International 2015 is also the first edition to include an Open Qualifier, available to all amateur and professional teams that weren't invited to either the Main Event or the Regional Qualifiers.

For a list of physical merchandise and promotional digital items, see The Secret Shop 2015 Catalog.

The International 2015 can be viewed live for free on DotaTV in-game. 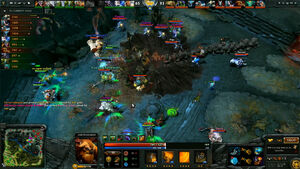 A fight breaks out outside the Dire base

In the All-Star match of 2015, two teams, Team ChuaN and Team n0tail, faced each other in a best of one, playing a 10 vs 10 match (All Pick). Five players of each team were decided by Compendium owners, who were able to vote for 5 professional players for each team. The captains of each team (ChuaN and n0tail) then chose 5 random people from the audience to join the team, completing a 10-man team.

Just like in the previous years, there was no secrecy between the teams, mainly making fun picks. The match was not played in the booths, but was instead on the center of the main starge, on 2 rows of tables facing each other, meaning both teams could hear each other, the casters and the crowd.

The 10 vs 10 game mode was later made available to the public as a custom game mode.

*The last audience member on Team Chuan turned out to be Dendi, who was dressed in a

Team ChuaN pulled ahead in the early game with a comfortable kill lead, with Dendi's

Pudge eventually stacking up to 5714 HP with

Flesh Heap. However, the mid game saw Team n0tail swing the balance back in their favor, with SumaiL leading the charge on his

After taking a decisive teamfight, Team ChuaN headed down mid to end the game once and for all. But as the Radiant Ancient neared destruction, it was shielded by

Guardian Angel. With these few precious seconds, iceiceice made liberal use of

Walrus Kick, pushing away the remaining members of Team ChuaN, sometimes into the fountain. As the Ancient dropped to under 5% health, Hao's

Queen of Pain jumped in to finish the job, only to be kicked into the trees and finished off by Team n0tail.

With Hao dead, Team ChuaN had been effectively teamwiped. The living players on Team n0tail rushed towards the Dire base, while

Nature's Prophet pushed in the top lane with a

Divine Rapier. Uncoordinated and respawning one by one, team ChuaN was picked apart by the larger Radiant force, allowing SumaiL and his teammates to rush the tier four towers, and destroy the Ancient.