From Dota 2 Wiki
(Redirected from The Greeviling (event))
Jump to: navigation, search

Frostivus 2012 was an event that took place during the Christmas season of 2012. It featured The Greeviling, a game mode where players transform into their Greevils and complete to clear out more Greevil camps than the opposing team.

The main attraction of the Greeviling is a new game mode added in a separate match-making mode, similar to Diretide. It is based on All Pick, allowing each of 10 players to pick a hero from the full hero pool. The towers and buildings from both sides are invincible, and no lane or jungle creeps spawn. Rather than attempting to destroy the enemy ancient, each team is looking to kill a certain amount of Greevils scattered around the map.

No gold can be earned in this game mode, and a flat rate of approximately 900 experience per minute is given globally to every hero. Instead of purchasing items, each hero begins with a

Xmas Stocking, giving them an assortment of starting items, with more to be obtained from killing greevils. 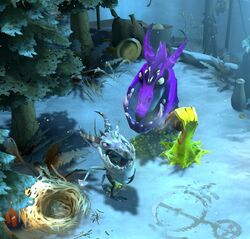 Starting at 30 seconds into the game, and approximately every 3 minutes afterwards, 3 jungle camps will be filled with wild greevils. At first they will be powerful Megagreevils with various spells based on their color, and True Sight. As the game goes on, the Megagreevils will become more powerful, and become supported by Greevil Minions. Eventually, multiple Megagreevils will spawn in each camp.

The objective of the game mode is for a team to score 11 last hits on the last Greevil in a camp. Damage done to the camp, or killing a majority of the Greevils in the camp does not matter, only the last hit, allowing for a crafty player to steal the point for their team. Upon the death of the last Greevil in a camp, he will drop A Gift, distributing a single item to a random player of each team.

The largest novelty of The Greeviling game mode is the ability for a player to use their Greevil as a secondary hero in the game. After opening the Xmas Stocking given at the start of the game, a

Greevil Whistle will always been given to the player, allowing them to freely switch between their hero and Greevil. As an added bonus, while in Greevil form you also receive a

Greevil Blink Bone and one of the following at random:

A player's Greevil starts with 690 health and 360 movement speed, and shares it's level with the player's hero. It also has a set of three Greevil versions of spells from other heroes in the game (two regular abilities and an "ultimate"), and a set of bonus stats, which are determined by the color and amount of essences fed to the egg before it was hatched.

The following abilities are associated with a certain color. A player's Greevil has a random chance to receive two of these abilities when the courier is hatched, based on a randomly chosen color from the egg. The level of the ability is related to the amount of that color of essences in the egg.

Example: A Greevil egg having three red, three blue, and two yellow essences has a chance at level 3 red, blue, and purple abilities, and level 2 orange, green, and yellow abilities. 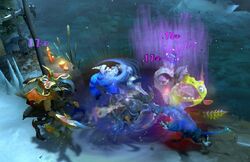 The third ability slot on a Greevil is considered its ultimate. The ultimate is not randomly assigned, but is simply based on the overall color and rank of a Greevil egg when it was hatched. 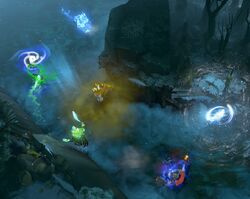 A teamfight happening near the bottom rune, with everyone slipping about on the ice.

As winter comes along for the Dota world, the landscape has changed. The Greeviling uses the alternate map appearance added in The Greevling Update, and changes the physical playing field in the new game mode. The river, now frozen over as solid ice, is incredibly slippery. Trying to navigate onto the river will cause a unit to slide rapdily in the direction it was moving before, not slowing down unless a wall or dry ground is hit. Moving around properly is very difficult without

All the normal Dota buildings remain on the map, but they are all invincible, as they are not the objective of The Greevling.

During The Greeviling, gifts are given out to those who bring back the Shopkeeper's wares. The team who ended up reaching 11 Greevil camp kills first receives a Nice Frostivus Gift, while the losers receive a Naughty Frostivus Gift as a consolation. Both gifts have a chance of dropping cosmetic items, essences, greevil eggs, or the holiday exclusive Fistful of Snowballs and Pile of Coal.

Frosty Treasure of Frostivus drop during the event as well, requiring a Frostivus Treasure Key from the store to open.

On winter's breath, the first signs of Frostivus!

Frostivus is coming soon! That merriest of times, when the river freezes over, the cold closes in, and Dire and Radiant alike retreat to the cozy security of their bases. It's the time to count blessings, lick wounds, and lay festive plans for next year's campaigns of death and destruction. The woods are snowy, the river is slippery, and the creeps are asleep in their dens. Special days!

A tradition of truce

With the river more treacherous than ever, forays into enemy terrain are unpredictable affairs, therefore during Frostivus a traditional truce extends from bank to bank. A time-honored truce so long observed that it is impossible to imagine what sort of event could lead to its breaking. With razors strapped to their boots, hooves and talons, it is a fine time for skating--but never for fighting, oh no! Remember the truce!

No Frostivus would be complete without endless games and riotous behavior. Raise a cup of Eultide cheer and pour it on your teammate! Fling Puck around in a game of Ice-Is-Not-Nice! Lie in the snow and make Death Prophet Angels! Fell the tallest Frostivus tree with only a Quelling Blade! See who can plant the glittering Star of Madness on Treant's forehead!

Nothing bespeaks Frostivus like presents heaped around the towers! Find the one with your name on it, or engage in a wicked game of Gankee Gift Swap. Giving and receiving gifts is the essence of Frostivus. And even in the Season of Givening, it's good to be good to yourself: The Dota store is filling up with amazing holiday items that will carry you to victory in the new year!

Misery piled on misery! As the cold closed in, how we looked forward to Frostivus. Instead we get The Greeviling! The shops have been plundered, our gifts ripped open, our precious items scattered through the woods by a dire tide of Greevils! What caused this swarming chaos? Who hatched all those Greevil eggs? Who can we blame for burying us in this horde of mischievous imps? What's that you say?

It's our own damn fault?

Our Traditions in the Toilet!

They're everywhere! All through the woods, giftsnatching Greevils are enjoying our gifts in their foul dens. They will only surrender them by force! Should you face these wild Greevils, be sure you bring your own well-behaved Greevils along. And when the going gets tough, blow your whistle and call your Greevil! He will put you somewhere safe (we're not exactly sure where) and take matters into his own grubby claws!

For lo, The Greeviling is a time of endless carnage, when the Greevils run riot and the snows are stained red. Even so, it's not without its pleasures. Every wild Greevil whose trove you plunder will spit up a gift for friend and foe alike! (You will want to wipe it off, as it has been in a Greevil's gullet.) You might not get what you asked for, but isn't giving more rewarding than receiving? Would someone please explain this to the Greevils?!

If for some reason you haven't had your fill of the pestiferous creatures, unhatched Greevil eggs are available and ready to be imbued with the magical essences that make these creatures such a pain in the--I mean, such a wonder to behold!

While Frostivus must wait til next year, this is the perfect time to celebrate The Greeviling with gifts galore. The Dota 2 store is stocked with new marvels beyond the reach of greedy Greevils--such as the winning entries of the Polycount Contest.