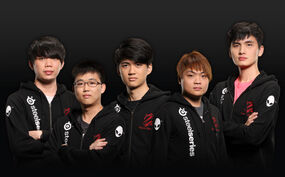 Team Zenith is an esport organization based in Singapore.

Team Zenith holds a legacy in the competitive scene. The original Team Zenith was originally under the clan mVp (most valuable player) in the last quarter of 2005. In August 2006, they were christened Team Zenith, sponsored by HP and AMD. They won the CAPL and ESWC 2008 in Paris, and celebrated a lot.

After clinching 3rd place in The International 2011, members of Scythe.SG decided to reform a team under the name "Team Zenith". They had been looking for a 5th player for months before The International 2 when they revealed Loda.

Following a 5th place finish at The International 2012, Zenith went through a restructuring, during which hyhy retired and Loda left. LuX and alanter were chosen to take their places after intense trial and interview sessions helmed by AntShark.

In January 2013, YamateH and Ice from Neolution Orange joined the team, replacing LuX and alanter.

In September 2013, iceiceice left for Team DK, signifying the official end of the team.[3][4]