From Dota 2 Wiki
Jump to: navigation, search
This article is about the Dota team. For the hero, see Dragon Knight. 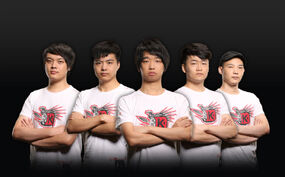 DK is a Chinese DotA team.

DK was set up in 2010 with a roster including Chinese rising stars rOtk, Yueru and LaNm, participating in WDC and SMM that year, they did not achieve much results. DK started the great Chinese reshuffle in 2011 when they offered cash to BurNIng and KingJ of EHOME, while obtaining Nirvana's PIS and LGD's Sharingan later on. Undoubtedly the "Galacticos" of the DotA scene, DK failed to live up to expectations. Ksssssss, the only remaining member of the original team, was replaced by the returning rOtk from Tyloo later on. Continuous sub-par performances led to PIS' retirement, KingJ's transfer to Nirvana and Sharingan's move to PanDa. DK's captain, BurNIng, immediately called upon old teammate and friend LongDD alongside Zippo and Yueru. DK had suddenly become a strong team after these replacements. First winning the ACG Chinese qualifier, DK continued to roll on winning 7 tournaments to date including the highly touted World DotA Championship and G-League's Season 2. However, they only achieved a top 8 finish in SMM 2011 after getting knocked out by LGD.

In March 2012, DK began playing Dota 2. They were the first team to announce their invitation to The International 2012.

In October 2012, Dai and QQQ from EHOME joined, replacing LongDD and Zippo.

In September 2013, DK announced the pickup of LaNm, Mushi and iceiceice. Dai was also confirmed to be staying on the team.[5][6][7]