Sun Wukong, the Monkey King, is a melee agility hero, best known for his slippery nature and his ability to do Mischief, deceiving his enemies by turning into trees and other objects. Armed with his magic extending staff, the Monkey King slams the ground with Boundless Strikes, and leaps to the treetops to have advantage over his foes with Tree Dance. Perched on a tree, he gains a clear view of his surroundings, allowing him to jump down on unsuspecting targets, dealing heavy damage and slowing their escape with Primal Spring. As a carry, the Monkey King is granted extra damage and lifesteal from Jingu Mastery after landing consecutive attacks on his opponents. In a teamfight, at Wukong's Command an army of clones is sent out across the battlefield to fight for him, while he himself has his armor increased. Together with the help of his clones and his team, the Monkey King is a force to be reckoned with.

Sun Wukong, the Monkey King
▶️ "There's a lot of stories about the Monkey King. Some of 'em are even true."
Lore:
For 500 years the mountain pressed down upon him, only his head free from the crushing weight of the stonewrought prison the elder gods had summoned to halt his childish rebellion. Moss grew along the lines of his exposed face, tufts of grass sprouted from his ears; his vision was framed in wildflowers reaching from the soil around his cheeks. Most thought him long dead, tormented by the gods for waging war against the heavens until naught but his legend survived. But, as the stories go, the Monkey King cannot die.

So he waited. Until the gods came to offer a chance at absolution, he endured. And when they did come to name the price, Sun Wukong accepted their charge: he would accompany a young acolyte on a secret pilgrimage, protect him from demons and dangers of the road, and guide the man home in possession of a coveted relic. Do that, and humbly obey the human's commands in service to their holy mission, and Wukong would prove himself reformed.

For a change, Sun Wukong fulfilled his oath to the gods with honor, and atoned for the sins of past insurrections. The acolyte, much learned in hardships, was returned to his home temple, relic in hand; and Wukong-finding himself for the first time in proper standing with any gods of consequence-was content for a short while to give up his old thirst for adventure and glory. But the Monkey King was born for mischief...and offending the gods never gets old.
Voice:
Bill Millsap (Responses)

Ability
Target Point
Affects
Enemies
Damage
Instant Attack
Monkey King enlarges his staff and slams it against the ground, stunning enemies in a line and damaging them with a critical hit based on his attack. Has True Strike.
Cast Animation: 0.4+0.5
Cast Range: 1200
Effect Length: 1200
Effect Width: 150
Critical Damage: 150%/175%/200%/225% (

Boundless Strike Stun: Dispellable with strong dispels.
The legendary Jingu Bang grows to match its master's will, ensuring no enemy can escape the Monkey King's reach.

Ability
Target Unit
Affects
Self / Trees
Monkey King jumps to a tree and perches atop it. While perched, he gains the Primal Spring ability-a channeled leap attack. If Monkey King's tree is destroyed, he falls and is stunned for 4 seconds. Taking damage from player controlled units or Roshan while on the ground puts Tree Dance on cooldown.
Cast Animation: 0.3+0
Cast Range: 1000 (

The stun upon falling off of a tree pierces spell immunity.

Getting rooted while already leaping does not cancel the leap.
Modifiers

Bounce Leap: Dispellable with death only.

Bounce Perch: Dispellable with death only.

Getting rooted while already channeling or leaping does not cancel the spell.
Modifiers

Bounce Leap: Dispellable with death only.

Spring Slow: Dispellable with any dispel.
Leaping from the safety of cover into the midst of his enemies, Sun Wukong attacks without mercy.

Ability
No Target
Affects
Self
There is no description for this ability.
Cast Animation: 0+0

Disables both the adding of the counter and the buff on Monkey King.
Modifiers

Quadruple Tap Counter: Dispellable with death only.
Always sensitive to the moods of its master, the Jingu Bang radiates power when Sun Wukong's combat fervor is on full display.

Transform: Dispellable with any dispel.
Watch out for that tree. 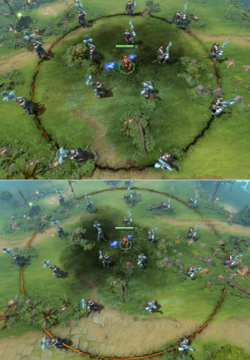 Spawns a monkey soldier near you at regular intervals. Soldiers do not spawn while invisible or on trees. Soldiers only attack buildings when Monkey King himself is nearby.
Modifiers

Fur Army Damage Bonus: Dispellable with death only.
Monkey King rips out a tuft of fur to blow at his enemies, charging each strand to transform into a copy of himself.