From Dota 2 Wiki
(Redirected from Splash)
Jump to: navigation, search

Cleave causes a melee unit's attacks to deal a portion of its damage in an area in front of it. 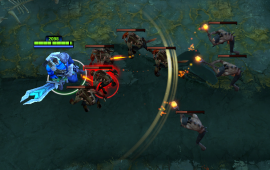 Sven cleaving through a creep wave. 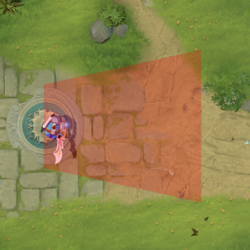 Cleave damage is applied in a trapezoid shape.

If a unit has cleave, its attacks deal damage in an area shaped like a trapezoid in front of the attacking unit upon successfully hitting the target. Ranged heroes cannot cleave in the default game modes, because either the cleave-granting ability has its cleave part disabled for them, or the ability is unobtainable by them. An attack is classified as melee when the attack does not rely on projectiles. The primary attack target is not hit by the cleave damage. An attack has to actually hit the target in order to cleave. A missed attack, be it caused by evasion or a blind effect, does not cleave. Cleave hits invisible, but not hidden or invulnerable units, and does not work against wards and buildings.

If a game mode allows ranged heroes to obtain the normally unobtainable cleave abilities (e.g. Ability Draft), the cleave of

Great Cleave fully work for them. The cleave area, just like for melee heroes, is based on the attacking unit's position and happens on attack hit. This means the cleave damage is always applied in front of the attacking hero, even when the target was much further away.

Conditional attack damage bonuses which are counted by cleave are:

Conditional attack damage bonuses which are not counted by cleave are:

Cleave stacking
Cleave also fully stacks with other sources of cleave. Each source of cleave works fully independently. Their damage is not summed up, each of them deals its own instance of damage.

Great Cleave, buffed with a level 4

Battle Furies would deal 4 instances of damage on each attack to units within 650 range in front of him, one coming from Great Cleave, one from Empower and 2 from the Battle Furies.

Talent-based cleave has a start radius of 150, distance of 650 and end radius of 360. The following heroes have a talent that grants them cleave.

Splash is in some ways the ranged version of cleave. It works in a similar way as cleave does, with the main difference being that the damage is typically dealt in a circle around the attacked unit, not in a trapezoid in front of the attacking unit. When attacking with splash, the primary target of an attack does not receive the splash effect. If an attack misses, no splash damage is applied in the area. Splash works with attack modifiers the same way as cleave does.

Doom is able to acquire the

Splash Attack of the Ancient Black Dragons with his

Besides Cleave and Splash, there are some unique attack-based area damage abilities, which appear all once each. This means they also have unique behaviors and only share some similarities with Cleave and Splash or with each other. 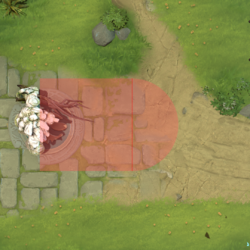 The biggest difference to cleave is how the damage area is calculated. While cleave areas are trapezoid-shaped, with a starting width, distance and end width, Tree Grab's area is the shape of a Norman Window, a rectangle with a semi-circle on one end. Like with cleave, the area is locked on Tiny, always being in front of him, no matter how far away the attack target is. 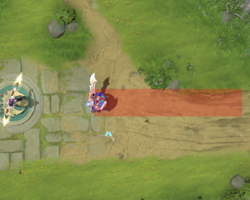 Psi Blades causes Templar Assassin's attack to damage enemies behind the attacked target. The damage is based on how much exactly the primary attack target took, and is dealt as pure damage to units behind it. The damage counts as spell damage, but it doesn't benefit from spell damage amplification or work with spell lifesteal.

The area has a rectangular shape and its direction is based on Templar Asassin's position on projectile impact. The area between Templar Assassin and the attack target is unaffected.