Barathrum, the Spirit Breaker, is a powerful ganker-type melee strength hero that excels at focusing on and taking out lone targets in skirmishes, while lacking presence in larger team fights. His Charge of Darkness lets him charge rapidly towards any enemy visible on the map, while knocking off all enemies in his path. If you see the charge coming, it may already be too late. Bulldoze provides him with bonus movement speed and status resistance in order to easily chase his opponents while reducing the duration of most disables. He is picked mostly for his high damage given by his Greater Bash which crushes the life out of his helpless victims (and stuns them). Barathrum can instantly and quickly move to his enemy via Nether Strike and shock them with a soul-bashing blow. Tanky, mobile and with an array of high-damage knockbacks, including a passive one attached to his right clicks, Spirit Breaker's ganking capabilities are second to none.

Barathrum, the Spirit Breaker
▶️ "I'm the beast of many parts; I part enemies from their lives."
Lore:
Barathrum the Spirit Breaker is a lordly and powerful being, a fierce and elemental intelligence which chose to plane-shift into the world of matter to take part in events with repercussions in the elemental realm that is his home. To that end, he assembled a form that would serve him well, both in our world and out of it. His physical form borrows from the strengths of this world, blending features both bovine and simian--horns, hooves and hands--as outward emblems of his inner qualities of strength, speed and cunning. He wears a ring in his nose, as a reminder that he serves a hidden master, and that this world in which he works is but a shadow of the real one.
Voice:
Fred Tatasciore (Responses) 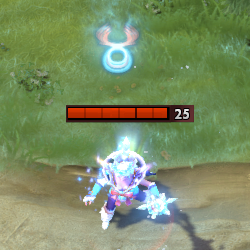 Visual indicator above the target.
Charge of Darkness

Ability
Target Unit
Affects
Self / Enemies
Spirit Breaker fixes his sight on an enemy unit and starts charging through all objects. All enemy units passed through and the targeted unit will be hit by a Greater Bash. If the targeted unit dies, Spirit Breaker will change his target to the nearest enemy unit to that location.
Cast Animation: 0.3+0.5
Cast Range: Global
Greater Bash Radius: 300
Charge Speed Bonus: 300/325/350/375 (

Greater Bash is still applied, since it pierces spell immunity.

Blocked fully only when primary target. Blocked upon cast. If the charge has already begun, its impact is not blocked.
Modifiers

Charge Of Darkness: Dispellable with death only.

Charge Of Darkness Target: Dispellable with death only.

Special Attack: Dispellable with death only.

Charge Of Darkness Vision: Dispellable with death only.

Stunned: Dispellable with strong dispels.
Barathrum erupts from the darkness with unwieldy force.

Bulldoze: Dispellable with any dispel.
Barathrum warps the fabric of reality around him, lessening its influence on his physical form.

Ability
Passive
Affects
Enemies / Self
Damage
Magical
Gives a chance to stun and knockback an enemy unit on an attack. Deals a percentage of movement speed as damage.
Proc Chance: 17% (

Disables bash from attacks, but not the one from spells.
Modifiers

Special Attack: Dispellable with death only.

Nether Strike Vision: Dispellable with any dispel.
Barathrum temporarily returns to the realm from where he came, bringing with him the retribution of both worlds.