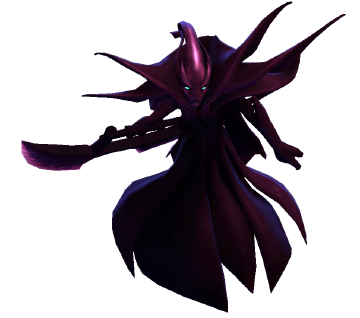 The standard Spectre build, it focuses on taking advantage of Spectre's amazing late game while compensating her awful early game. Early game, Spectre can't do much but farm for

Radiance, but after getting it Spectre can become a huge threat with Haunt. She can Haunt and push lanes while harassing enemies, or even use it to kill fleeing enemies. In a teamfight, Spectre becomes a huge threat. She has plenty of area damage to constantly wear down opponents, while being durable enough that punishing her for it is extremely hard. She is heavily item dependent with this build, but once she gets

Another build she has is an early to mid game ganker build. Instead of focusing on rushing Radiance, she grabs items like

Drum of Endurance and

Urn of Shadows to help dominate the laning stage, and can transition into a very effective carry late game, but it won't be as strong as the standard hard carry build.