Slithice, the Naga Siren, is a melee agility hero who can be played both as a late-game carry and an early/mid-game support. Slithice is an item dependent hero yet with the right style and inventory choices she can overpower many other heroes that deal strong physical damage while casting her active abilities to handle her enemies altogether and turn the tides. Mirror Image creates three illusions to wreak havoc upon her enemies. Ensnare is a very useful spell with several unique features. It not only holds an enemy in place, but also prevents them from blinking and going invisible. Rip Tide calls the forces of the seas, allowing the Siren and her illusions to unleash a wave of magical water to wash away foes and degrade their armor. The Song of the Siren is the ultimate ability for team battles; Naga Siren performs a mystical song to put her enemies to sleep in an area around her. Song of the Siren is her tool for initiation, as while her enemies are under her slumber her allies can come forth and prepare to unleash their attacks after the song wears off. Time is Naga's best friend, for as the game wears on, Slithice will gradually consume more and more of the map and engulf enemy towers and heroes like the rising tide itself.

Slithice, the Naga Siren
▶️ "I sing the Siren song of war."
Lore:
Among the high-sworn of the Slithereen Guard there is a solemn vow oft repeated before battle: No Slithereen may fail. In truth, these words are equal parts oath and enforceable covenant, for those who fall short of their duty are banished from the order. To fail is to be other than Slithereen.

Once most highly esteemed of her race, Slithice for many years commanded a battalion of her fellows, using her formidable voice as her greatest weapon. Powerful, sinuous, serpentine, she led her deadly Guard in defense of the Deep Ones, and the great wealth of the sunken cities. But in the final battle of Crey, her forces were driven back by a marauding army of levianths intent on finding tribute for their god Maelrawn. After the long and bloody onslaught, as the bodies were cleared from the sunken halls, a single jeweled chalice was found missing from the trove. Of her hundred Guard, only a handful survived, but their bravery and sacrifice were of little consequence. What mattered was that treasure was taken. Honor destroyed. And so Naga Siren was cast out. Banished to search for the stolen chalice. Though she might add a hundred times her weight to the golden trove, she is doomed to live apart until that day she returns that which was taken. For no amount of gold is equal in honor to the honor she lost.
Voice:
Linda K. Morris (Responses) 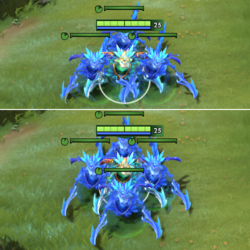 Mirror Image: Undispellable.
Slithice, while being strong in her own right, is notoriously hard to track down.

Ensnare: Dispellable with any dispel.
The only way to escape the onslaught of a Slithereen is to never oppose one in the first place.

Ability
Passive
Affects
Enemies
Damage
Magical
The Naga Siren and her images have a chance on attack to hit all nearby units with a damaging wave of water that lowers armor for 4 seconds.
Proc Chance: 17%
Radius: 300
Damage: 30/40/50/60
Armor Reduction: 2/4/6/8 (

Armor reduction persists if debuff was placed before spell immunity and when not dispelled.
Modifiers

Rip Tide: Dispellable with any dispel.
A torrent from the Deep Ones crushes the defenses of the Siren's enemies.

Song of the Siren

Allies)
All enemies in range of the Naga Siren are put into a magical stasis where they cannot act or be attacked. Using Song of the Siren again will end the duration early.
Cast Animation: 1+0.3
Radius: 1000/1200/1400
Maximum Health as Health Regen Bonus: 0 (

Song of the Siren regenerates all nearby allies for a percentage of their max health per second.

Song of the Siren Aura: Undispellable.

Song of the Siren Healing: Undispellable.

Song of the Siren: Undispellable.
Slithice's powerful voice enchants leagues of opponents, while calling her Slithereen kin in a time of need.

Song of the Siren End

Ability
No Target
Release enemy units from your song so they can be targeted again.
Cast Animation: 0+0.97