The deceptive shoals around Yhilla's Cove have sunk many fortunes, but there are still some skilled tillermen who make use of its windward shelter.

The Yhilla's Cove is the starting zone of the first act of the Siltbreaker campaign. 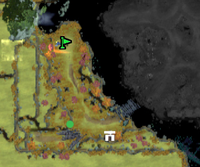 The Yhilla's Cove is a small cove cut off from a bigger unknown main land. However, the only path towards the main land is blocked by piles of bundled tree logs and is therefore unreachable. The cove is connected to the Howling Weald by a seemingly fragile wooden bridge, which goes over the river surrounding the cove. The cove is an autumn themed forest-like area, with dry looking grass trees with brown-orange colored foliage and a couple of dead trees. The ground is also covered with foliage leaves, with only a small mud path being free, which leads from the checkpoint shrine in the north towards the bridge in the south-west. Light rain is showering the cove periodically, accompanied by distant thunders and light lightning flashes. Permanent night time is shrouding this zone, leaving it dark the whole time.

There are no quests associated with this zone. 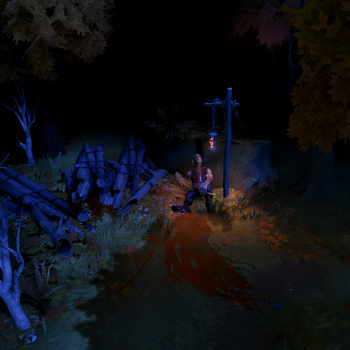 Theod lying next to the blocked pathway in Yhilla's Cove.

Theod is an allied NPC character who leans injured at the cliff wall, next to the blocked pathway in the Yhilla's Cove, below the lantern. He is steadily losing health over time, but does not die. When talking to him, he reveals that he was supposed to guide the heroes to Kalabor, but things took a bad turn.

A shopkeeper resides in his little tent on the south end of the cove, right in front of the wooden bridge. His goods consist of very basic items and consumables, to aid passing the Howling Weald.

The following items can be bought at this shop:

There are no hostile creatures in this zone.

There are no objects to interact with in this zone.