It is uncertain whether the arachnid infestation on the old pilgrim's road was a cause of the Temple of Ermacor's abandonment or the result of it.

The The Silkmire Pass is, after the starting zone, the fifth zone of the first act the Siltbreaker campaign. 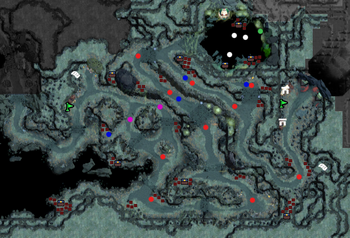 The Silkmire Pass is a single long pass wriggling back and fourth through a ridge. The pass starts at the gate from the Crossroads Garrison at the west and wriggles its way towards the east, going up the plateaus like on the side of a mountain. The Silkmire Pass is, similar to the previous zones, a dead forest, but unlike the other ones, is riddled with weeds, shrubs and vines, making it appear more alive, although most trees are dead. The entire zone is covered in giant spider webs. At the very north of the zone there is a very shallow lake. On the north wall of this lake is a giant hole, in which Ankaboot resides.

Note: Although not displayed, in order to get 3 stars, the spider queen must be defeated as well. This is not required for 1/2 stars.

Burps is a friendly Bonemeal Tank who has been captured by the spiders. When rescued, he tellst hat he just wanted a "baby crawly" (Silkmire Swarmer), but "momma crawly got mad". Rescuing him creates an advantage at a later stage in the campaign.

Silkmire Swarmer, Silkmire Spitter, Silkmire Marauder and Ankaboot reside within this area, along with many Pulsing Egg Sacks. The Swarms mainly come from the pulsing egg sacks or appear in the chasing squads. Spitters and Marauders appear scattered everywhere within the area, with Marauders being more rare. the egg sacks never appear alone and are accompanied by other spiders.

The very first two camps, which are basically next to each other (marked purple on the map) always consist of 1 Silkmire Spitter and either 6 or 8 Silkmire Swarmers.

All other camps (marked red) spawn 1 Silkmire Steel, and can have the following compositions, chosen at random:

Every 30, 45 or 60 seconds, a squad of spiders spawn at one of the blue marked spots in the zone and chase the players. They start spawning once Ankaboot is spotted for the first time and stop spawning upon advancing into the next zone. The chasing squads consists of the following compositions:

The checkpoint shrine is located on the left side of the path, after the path turns left twice after entering the zone.

Pulsing egg sacks act like living land mines, bursting open when stepped on by the heroes. When bursting, a swarm of spiders is released who attack the heroes. Every hero within range of the egg sack also gets poisened as it bursts open, taking non-lethal damage over time. Egg sacks spawn together with Marauders and Spitters on the red marked spots on the map. There are also 3 giant stacks of egg sacks in Ankaboot's lair, which contain 24-36 egg sacks in total. On avarage, 59 egg sacks spawn upon entering the zone (including the 3 giant stacks), so that extra sacks from Ankaboots are usually required to get 65 egg sacks.

Treasure chests have a 50% chance to spawn at any of the marked areas on the map. The chest located in the boss fight area has a 100% chance of spawning, but its loot list does not differ from the other chests in this area. The chests of the Silkmire Pass can drop the following items: