Long since the last prayer uttered to his name, the temple of Ermacor the Pathfinder bridges two lands separated by foreboding teeth of the world.

The Temple of Ermacor is, after the starting zone, the sixth zone of the first act the Siltbreaker campaign. 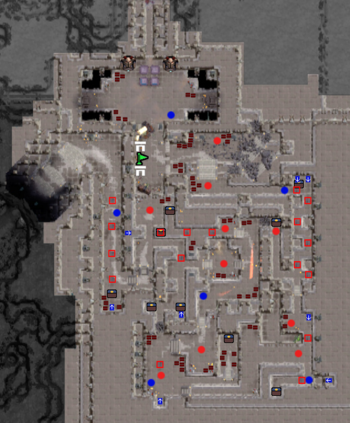 Temple of Ermacor is a temple under the ground. Its hallways resemble a maze, as some of the hallways have dead ends and only one path leads towards the exit towards the Kalabor desert. There are several small rooms in the temple, some of them integrated with the path. The rooms usually chests, but also camps of Darkwing Golems and Spitters. The entire temple is riddle with vases and unlit candles and contains several deadly traps.

The temple appears very old and slowly crumbling. Some paths in the temple are blocked off by debris of collapsed walls and pillars. The ceilling appears to have holes as well, with rays of light falling through them. The tile floor is heavily covered with dust and sand, giving the temple a very dry look, although there are some water pits on the east side of the temple.

There are no notible characters within this zone.

Darkwing Golems and Darkwing Spitters reside within this area, both appear in big and frequent camps throughout the zone and also spawn in waves and chase the players.

All camps (marked red) can have the following compositions, chosen at random:

Every 60, 65, 70 or 75 seconds, a squad of Darkwings spawn at one of the blue marked spots in the zone and chase the players. They start spawning once the temple is entered and stop spawning upon reaching the final room with the Temple Guardians and the exit to the Kalabor desert. The chasing squads consists of the following compositions:

Temple Guardians are located at the north of the zone, guarding the gate towards the Kalabor desert. They are initially inanimated statues standing to the left and right of the exit, and are animated when the four buttons in front of the exit are pressed.

The checkpoint shrine is located at the end of the zone, within the boss fight area. It is located between the two shops right after enter entering the room.

There are no Gastromancer Notes in the Temple of Ermacor. 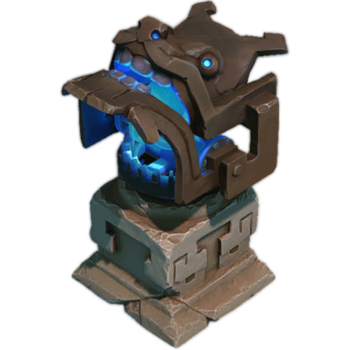 Stone traps are stationary objects within the Temple of Ermacor, shooting an arcane stone projectile when triggered. There are a total of 8 traps located within the temple, marked by blue boxes with white arrows on the map. Each trap has one or multiple triggers on the path it shoots along, marked by red empty squares on the map.

Treasure chests have a 50% chance to spawn at any of the marked areas on the map. The chest located in the boss fight area has a 100% chance of spawning, but its loot list does not differ from the other chests in this area. The chests of the Temple of Ermacor can drop the following items: