Where once a sheltering oasis flourished, residents and travelers alike must now make do with sharing a single dirty well.

The Kalabor Oasis is, after the starting zone, the eighth zone of the first act of the Siltbreaker campaign. 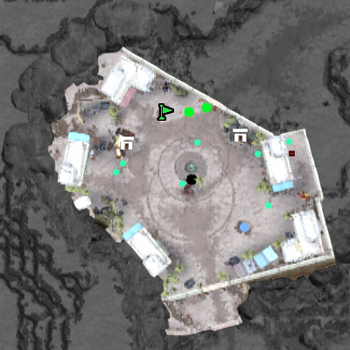 The Kalabor Oasis is a tiny town built around a well spring. According to the remaining inhabitants, it was a beatiful place until the well started to run dry.

The town consists of 5 stone houses and one watchtower, which are all merged into the wall which surrounds and protects the town. The well is located at the center of the town, with a naga statue watching over it.

There are no quests in this zone.

Sathington is the grandpa of Brigwyr, who waits for him in the Kalabor Oasis. He guards the exit towards the Kalabor Waste and blocks it until ensuring that Brigwyr returned to him.

After helping Brigwyr pass the Road to Kalabor, he stays in the Kalabor Oasis with his grandpa.

Hathe Moonie walks in circles around the town. He says that he does not think the attack of the monsters is the reason why the Kalabor Oasis went downhill.

Pip Bon Aire sits at the edge of the well. He offers water from the well when talked to, but warns that it isn't what it used to be, but one can get used to it.

Wellum Potes waits for his replacement from his guard tower shift.

Ed Moor argues with Kane Istan to try making sacrifice for Rhyzik in order to please him.

Kane Istan argues with Ed Moor saying that he is insane for wanting to make sacrifice for Rhyzik.

Donce Cesa hides behind a house, because he doesn't want anything to do with this and just wants to read his books, since he doesn't see himself as a warrior.

There are no hostile creatures in this zone.

The checkpoint shrine is located at the north of the oasis, to the left of the exit towards the Kalabor Waste.

A shrine is located south-east of the oases, which can be used to restore health and mana every 5 minutes.

There is one vase in the Kalabor Oasis. It is located behind the stone house at the north-east of the oasis, next to Donce Cesa. It has a 90% chance of dropping

Cheese and a 10% chance of dropping a