The wolf-kin of the Longclaw clan roam the breadth of the Howling Weald, a constant danger to the thread of commerce still daring for the coast.

The Howling Weald is, after the starting zone, the first zone of the first act of the Siltbreaker campaign. 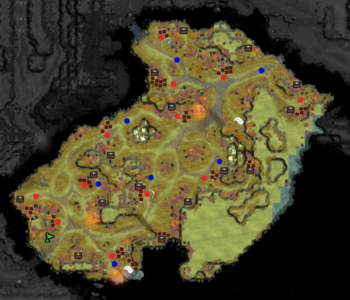 The Howling Weald is a forest with many mud paths cutting through it. The weald is almost completely cut off from any other land, by a river which stretches from its west, over the north towards its east, and a lake towards its south. Only a small land bridge at the south-east connects the weald with the The Silkmire Pass, however, this land bridge is a cliff and therefore unpassable. The weald is connected to Yhilla's Cove on the south-east and the Crossroads Garrison on the north-west with seemingly fragile wooden bridges. There was a second wooden bridge leading to the Crossroads Garrison on the north-east, but this bridge has collapsed.

Just like Yhilla's Grove, the Howling Weald is autumn-themed, having the same trees, grass, grounds and muddy paths. The light rain, distant thunders, lightning flashes and darkness from the cove carry over to the weald. The weald is lightly divided into 3 areas by two cliffs which strike through the weald so that the south-west part is on low ground, the center part at medium ground and the north-east part high ground level. Two natural ramps between the low ground and medium ground area connect the areas together, and one natural camp connects the medium with the high ground. A giant ridge stretches from the south to the north-east of the weald, starting at the medium ground area and ending at the high ground area. This ridge is completely unpatable and narrows the weald down.

There are no notible characters within this zone.

Berzerker Hellbears and Woodland Hellbears reside within this area, scattered all around it in small camps. The hounds spawn in after a while and chase the players.

The hellbears spawn in fixed locations around the map. Their locations are marked with red dots on the map visible on the right.

The checkpoint shrine is located right after the wooden bridge from Yhilla's Cove, on the left side.

There are two Gastromancer Notes in the Howling Weald. The first note is located on a cliff facing the lake on the south, on the low ground area. The note is behind a camp of hellbears, and is accompanied by crates and sometimes a treasure chest. The second note located between some trees on the high ground area, to the right side after the ramp which connects the medium with the high ground.

Treasure chests have a 40% chance to spawn at any of the marked areas on the map. The chests of the Howling Weald can drop the following items: