The displaced folk of Kalabor face untold threats as they push to settle the wildlands.

The Crossroads Garrison is, after the starting zone, the second zone of the first act of the Siltbreaker campaign. 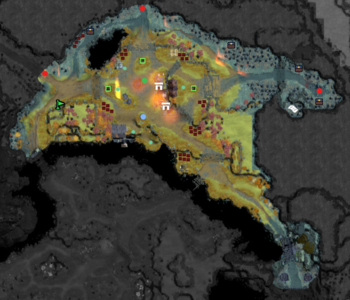 The Crossroads Garrison is, as the name already implies, a crossroad, where 3 roads lead to new places. At the south-west, a road is connected to the Howling Weald via a wooden bridge, the previous zone before the Crossroads Garrison. To the west, there is a road connecting to the Trial of Gallaron, which at first is blocked off by wooden barricades. To the north, there is a road connecting to the Bonemeal Ridge, which is also blocked off by wooden barricades. A long path in the south leads towards the Silkmire Pass, however, the path is blocked by an iron gate which requires two

The crossroad is cut off by the other zones by a river on the south side, separating the crossroads from the Howling Wealds, and cliffs on all other sides, separating it from the Trial of Gallaron, Bonemeal Ridge and the Silkmire Pass, with only the narrow paths connecting the areas. The garrison itself is located at the center of this area, on elevated ground. It has ramps on its east, north, west and south side, allowing direct entry from any of the 4 paths. In order to get on the path towards the Silkmire Pass, one must enter the garrison, as this path is not directly connected to the others, which are all connected together by a path going around the garrison at the center.

The garrison is fenced off with wooden barricades all around it, with only the ramps being free. Within the garrison, there is a campfire at the center, where Commander Targan is. To the right side, there are two shopkeepers with their setups. Behind the shopkeepers, on elevated ground, there is a small hut with a hay roof. In front of this hut, ther is a watchtower guarding the east ramp. On the west side of the camp, there is another watchtower guarding the west ramp. On the north of this tower, there are several objects located, including a water filter, a laundry line and a small wooden scaffolding with wood plans beneath it and some pans hanging on arope on it. To the east of this scaffolding, there is another watchtower, guarding the northern ramp. Behind the watchtower at the west ramp, there is an intact and a broken carts, right behind a lantern. Towards the south-east of these carts, there is a Shrine. There is also a big mill within the garrison, at the south-east, with a giant water wheel on the river. When going down the south path towards the Silkmire Pass, another watchtower can be found on the left side of the road right after the ramp. Its purpose most likely was to defend the south pass, but it has been abandoned. This is also where another bridge leads to the Howling Weald, but this bridge has collapsed, which is probably the reason why this watchtower was abandoned.

The environment of the Crossroads Garrison is split up in two. The road towards the Howling Weald and the garrison at the center have the same autumn theme as the Howling Weald, having the same trees, grass, grounds and muddy paths. All other ares of this zone are dark grey with no grass, and only dead trees with a bit brown foliage lying on the ground beneat them. The light rain, distant thunders, lightning flashes and darkness from the howling weald carry over to the crossroads.

*Although it says to visit the shop first, it is not needed for the quest.

Commander Targan is an allied NPC character who, when first met, grinds his weapon at the campfire in the garrison. When talked to, he explains the situation and asks the heroes for help. After accepting his request, he helps defending the place during the invasion. After succesfully defending the garrison, he tells the heroes how to advance.

There are 5 Footmen in the garrison. They help defending the encampnent during the invasion. They all can be talked to, revealing a bit about themselves and the situation.

There are 3 Watchtowers, one at the west ramp, one at the north ramp and one at the east ramp of the garrison. They are defensive structures, attacking enemies during the invasion.

No Creatures reside within this area. However, after starting the defense quest, numerous waves of creatures attack the garrison from the west, north and east. The waves consist of Berzerker Hellbears, Woodland Hellbears, Dire Hounds, Alpha Dire Hounds and Longclaw Skinchangers. After these waves,

Lucius Longclaw spawns in the north.

In the first wave, the following enemies spawn in groups:

They spawn 5 times in 10 second intervals, starting immediately after accepting the quest. This results in 50-70 Dire Hounds, 10 Alpha Dire Hounds, 15-25 Woodland Hellbears and 5 Berzerker Hellbears, from which:

10 seconds after the last spawns of the first wave, the second wave begins, spawning the following enemy groups:

They spawn 4 times in 10 second intervals, starting immediately after accepting the quest. This results in 32-48 Woodland Hellbears, 16 Berzerker Hellbears, 24-32 Dire Hounds and 12 Longclaw Skinchangers, from which:

25 seconds after the last spawns of the second wave, Lucius Longclaw spawns alone in the third wave. He always spawns north.

The checkpoint shrine is located on the way between the wooden bridge from the Howling Weald and the camp at the center of this area, on the right side of the path.

There is one Gastromancer Note in the Crossroads Garrison. It is located within the cemetery to the east of the area, in a small junctiun to the left, right after entering the cemetery. It can only be accessed after the invasion is over, since the cemetery is blocked off by wooden barricades which get destroyed during the invasion.

Treasure chests have a 50% chance to spawn at any of the marked areas on the map. The chests of the Crossroads Garrison can drop the following items: