Were it not for their limited fondness for battle planning, the Bonemeal Ogres might have driven the Longclaw clan from the Weald a generation ago.

The Bonemeal Ridge is, after the starting zone, the fourth zone of the first act the Siltbreaker campaign. 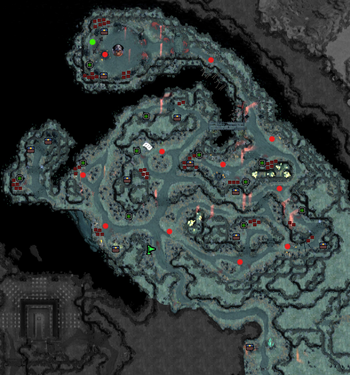 The Bonemeal Ridge is a dead forest riddle with cliffs and pits. Similar to the Trial of Gallaron, all existing trees are dead and the grass and ground took a dead dark grey color. The Bonemeal Ridge is under the control of the Bonemeal Ogres, which can be found everywhere within the area. Throughout the entire area, random objects like bottles, crates, poles, pots, lit candles and other miscellaneous objects can be found. Considering that there also are a lot of human bones lying around or hanging on ropes, and human skulls pierced on poles sticking in the ground, most of these random objects are most likely plundered from humans. There are also several prison cages (refered to as "Tetanus Cages") within this area.

The entrance to the Bonemeal Ridge is one single long wriggly path at its south. The path later splits into 3 direction, north, east and west, although all 3 paths connect later on again. The east path gets immediately split again, so that 2 smaller paths go around a bigger cliff. This cliff is pathable and connected to the paths on both sides with ramps. The paths merge at the other side of the cliff and then go turn northwards, up a small ramp on the higher elevated area. Here, the path splits again, one going further north and the other going towards the west, connecting with the main north path. The west path goes towards the water body which is located to the north-west of the ridge. The path goes all the way at the edge of the Bonemeal Ridge and connects with the north path at the north of the ridge again. Halfway through the west path, there is a hidden land extension on the left side of the path, which leads to what appears to be some sort of ceremonial spot. The north path immediately meets a ramp leading to the same elevated area as the east path does. Here is also where the east path connects with the north path again. Further up the north path, the west path connects with this path again. And for one last time, the path connects again with the east path here, this time via a bridge. So in the end, all 3 paths lead to the north-east corner of this area. After all 3 paths merge, they continue towards the north from here. This path now leads to Bogdugg, the leader of the Bonemeal Ogres.

Orb of Passage and then teleports to the Northern Outpost

A total of 11 Footmen are in the Bonemeal Ridge, imprisoned in Tetanus Cages. The footmen can be rescued by opening the cages, who then teleport away to the Northern Outpost. On the path into the Bonemeal Ridge, another Footman can be seen lieing dead on the ground.

Bonemeal Ogres, Bonemeal Tanks, Bonemeal Seer and Bogdugg reside within this area. The Ogres and Tanks are scattered all around in small camps, spawning at fixed locations marked on the map with red dots, while the 3 Bonemeal Seer and Bogdugg are located in a big camp at the very north end of the ridge. After a while, additional Ogres and Tanks spawn in 90, 95, 100, 105, 110, 115 or 120 second intervals at random locations on the map and chase the players. These ogres stop spawning once Bogdugg is found.

The camps consists of the following compositions:

The chasing squads consists of the following compositions:

The checkpoint shrine is located at the end of the narrow path leading into Bonemeal Ridge, on the left side of the road right before the path splits into 3 directions.

There is one Gastromancer Note in Bonemeal Ridge. It is located next to a Tetanus Cage on its right side. The cage is located towards north after the road leading into the ridge. There is a small ramp on the north path leading towards the cage, which is located on the left after passing the ramp.

The Footmen which need to be rescued are caged inside so called Tetanus Cages. These cages do not need any sort of key to be unlocked, but seem to be unlockable only from the outside.

Treasure chests have a 50% chance to spawn at any of the marked areas on the map. The two chests located in the boss fight area and the chest on the very west of the area on the small extension have a 100% chance of spawning, but their loot list does not differ from the other chests in this area. The chests of Bonemeal Ridge can drop the following items: