Beatrix Snapfire, or simply Snapfire, is a ranged strength hero armed with a wide array of firepower, riding into battle on her dragon toad Mortimer. Her powerful Scattershot blasts foes who get too close, while her mounted turret increases her range, allowing her to unleash a barrage of rapid fire attacks. Snapfire's coveted Firesnap Cookies give allies a boost, allowing them to leap a short distance. The cookies aren't her only secret weapon, her dragon toad has the ultimate nasty surprise for the enemy team—a long range artillery barrage of Mortimer Kisses that coat the map in searing lava.

Beatrix Snapfire
▶️ "I'm Beadie. N' this here's Mortimer. Nothing fancy. Just here to kill some time and if we can manage, some people."
Lore:
Beatrix Snapfire and her dragon toad Mortimer are a welcome sight to the ragged folk who scratch out lives along the desert routes and oases scattered throughout Nanarak, the rain-forsaken gateway to the Outlands.

As well known for her unrivaled skills as a weaponsmith as for dispensing wisdom, mirth, and the meanest firesnap cookies the world has ever seen, Beadie's survived to a ripe old age in a young keen's trade by being quick with her wits and even quicker with her guns.

Indeed, the Outlands are littered with the bones of bandits and ne'er-do-wells who thought to take advantage of her small stature and propensity for kindness.
Voice:
Laraine Newman (Responses)

Scatterblast Slow: Dispellable with any dispel.

Scatterblast Disarm: Undispellable.
A favorite from her collection, Beadie crafted Ol' Rackatee as her first line of defense when she ventured into the Outlands.

Stunned: Dispellable with strong dispels.
With the help of a secret mixture that pairs Beadie's baking skills with her passion for black powder, these battle biscuits pack a punch.

Lil Shredder Debuff: Dispellable with any dispel.
Beadie constantly tinkers with a design she first dreamed up plotting an exodus from her old gang.

Ability
Target Area
Affects
Enemies
Damage
Magical
Snapfire's friend launches a barrage of firespit globs over 6 seconds. Globs cause impact damage and create pools of firespit, which slow and apply damage over time. Snapfire has a reduced turn rate for the duration and a minimum launch range of 600. Each glob can be targeted with a right click.
Cast Animation: 0.5+0.73
Cast Range: 3000
Minimum Distance: 600
Maximum Distance: 3000
Impact Radius: 275
Turn Rate in Degrees per Second: 75
Number of Projectiles: 8 (

Grants a new ability: Gobble Up. Mortimer gobbles up a creep or an allied hero, which he can then spit towards enemies.

Magma Burn Slow: Dispellable with any dispel.
Little did Beadie know when she adopted Mortimer, dragon toads--which aren't even toads at all--share more than just a name with their distant draconic cousins. 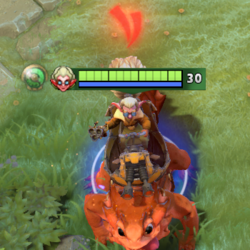 Visual indicator above Snapfire when gobbling a unit.
Gobble Up

Ability
Target Unit
Affects
Enemies / Allies
Damage
Instant Kill
Mortimer gobbles up a creep or an allied hero, which he can then spit towards enemies. The unit stays in his belly up to 3 seconds.
Cast Animation: 0.3+1.27
Cast Range: 150
Max Duration: 3

Gobble Up Belly Has Unit: Undispellable.

Gobble Up:
Mortimer gobbles up a creep or an allied hero, which he can then spit towards enemies. The unit can stay in his belly for only a few seconds.

Cast range: 150
Max duration: 3
Cooldown: 40
Notes: While swallowed, the unit is invulnerable and hidden. Can target allied heroes, or any non-ancient creep. Swallowed non-hero units get killed upon getting spat out. Has a sub-spell to spit the unit similar to Mortimer Kisses globs.

Spit Out:
Mortimer spits out the unit that's in his mouth, causing impact damage and stun in a large area. The glob leaves a pool of firespit that slows and applies damage over time.

Cast range: 3000
Impact radius: 400
Impact damage: 400
Impact stun duration: 1.5
Puddle duration: 3
Debuff damage per second: 100
Debuff duration: 1
Movemnt speed slow: 25%
Mana cost: 150
Notes: If the swallowed unit was not a hero, it gets killed upon reaching the target area. The unit is invulnerable during the airtime.