Roshan, sometimes also referred to as Roshan the Immortal, is the most powerful neutral creep in Dota 2. It is the first unit which spawns, right as the match is loaded. During the early to mid game, he easily outmatches almost every hero in one-on-one combat. Very few heroes can take him on alone during the mid-game. Even in the late game, lots of heroes struggle fighting him one on one, since Roshan grows stronger as time passes.
Roshan is not a creep which can just be farmed like the other neutral creep camps, fighting him is an important team decision, as it needs the correct timing and approach since it can decide the future of the match. Usually, it is fought as a team when it is safe to do so, meaning when the enemy team does not display a threat at the moment (for example after a successful team fight).

Roshan Slam: Dispellable with any dispel.

Strength of the Immortal 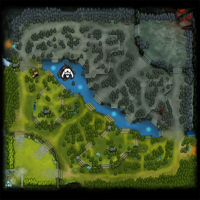 Roshan's location on the minimap

Roshan can be found inside his pit, which is located to the left of the top river rune spot. The pit is completely inside the river, with the river splitting up at its entrance and merging again right behind the pit. The entry of the pit faces south-east, towards the mid lane. The pit shell is U-shaped and has a length of about 1250 range and width of about 1050 range. The passable area inside the pit has a length and width of about 750 to 550 range.

Roshan can only be attacked from within that area, with the torches at the pit entry marking where it begins. Spells can target Roshan from anywhere and are not restricted like attacks. Roshan himself can also attack from anywhere, he does not have to be within his pit to attack. Roshan always stays at the end of the pit when not attacking and only attacks if enemy units come within 150 range of him, or damage him from within 1800 range.

Vision is very restricted around the pit by a vision blocker, which prevents units with ground vision from seeing past the boundary of the pit in either direction (in or out), even if they are on high ground. The vision blocker affects units and spells alike, so if a spell grants ground vision, its center has to be within the pit to see into it. However, the vision blocker does not affect units or spells with flying vision: they can see through it normally in both directions.

Iron Branches cannot be planted within the pit either, so it is not possible to easily block the entry off, or to create additional fog inside the pit.

Mischief has a unique behavior when used inside the pit, transforming the caster into

Refresher Shard, based on how often Roshan respawned. All other spells and items function normally inside the pit.

When Roshan is slain, he lets loose a deafening ▶️ roar, audible on the entire map, The scream is accompanied by a special piece of ▶️ music and an announcement from the announcer are played for all 10 players. Along with that, a screen message appears, announcing its death and which team killed it.

When Roshan is slain, he respawns after a random time between 8–11 minutes. Unlike with other neutral creeps, the respawn cannot be prevented by any means. The players do not get any indicator for when exactly he respawns, but spectators and casters can see a clock at Roshan's spawn point, showing the exact time left for the respawn (not until 5 minutes after Roshan was slain).

Each player of the killing team is rewarded with 135 unreliable gold, and the hero who deals the killing blow gets an extra random bonus of 200‒290 gold, effectively gaining 335–425 gold.

Upon each death, Roshan always drops the

Upon Roshan's second death and onwards, he also drops the

Cheese, a completely shareable consumable item, which can be sold for 500 gold by the player who initially picks it up, or used to instantly restore health and mana. Just like the Aegis, the Cheese can also be picked up by anyone. However, it can only be sold by the player who was first to pick it up. Therefore, if the Cheese is transferred from Player 1 to Player 2, only Player 1 can sell the Cheese.

Upon Roshan's third death, he also drops either the

Aghanim's Blessing, both having an equal chance of appearing. On his fourth death and onwards, he drops the Refresher Shard and Aghanim's Blessing, on top of dropping the Aegis of the Immortal and the Cheese. Both of them can be denied as well as any item, but no announcement will appear like denying the

Aegis of the Immortal.

The Refresher Shard is another completely shareable consumable item, which can also be sold for 500 gold by the player who initially picks it up, or used to instantly restore the cooldowns of all abilities and items, and restore all charges of charge-based abilities of the user. The Refresher Shard can be picked up by anyone as well. But just like the Cheese, it can only be sold by the player who was first to pick it up.

Aghanim's Blessing, when dropped by Roshan, cannot be sold at all, unlike the bought version from the shop. Just like the Cheese and Refresher Shard, it is shareable, but gets automatically used by the hero who picks it up, unless the item enters the backpack or when the hero already has the Aghanim's Blessing buff.

Roshan is an ancient creep, so that all ancient creep interactions apply, unless stated otherwise here. He also has 100% resistance to forced movement so that spells cannot move him at all. Roshan has no mana either, making him automatically immune to anything that works with mana, or null the effects of spells which are based on mana (e.g.

Mana Void only stuns him). Furthermore, several spells have a unique behavior towards Roshan, treating him specifically different than any other unit.

These spells cannot affect Roshan specifically, regardless of the ancient unit tag he has (meaning, even if he was not an ancient creep, these spells still would not affect him).

These interactions are unique to Roshan

The following spells completely apply all their effects except for the movement itself. This includes the disable coming along with the movement.

1 The damage is applied instantly, since it is queued to happen after the movement, which gets fully skipped.

2 Roshan gets stunned, instead of getting lifted. The AoE stun is applied instantly, since it is queued to happen after the lift, which gets fully skipped.

The following spells apply all effects as well, except for the disable along with the movement, so that they do not even interrupt Roshan.

These spells react on damage dealt by Roshan, getting either disabled or interrupted.