From Dota 2 Wiki
(Redirected from Push)
Jump to: navigation, search 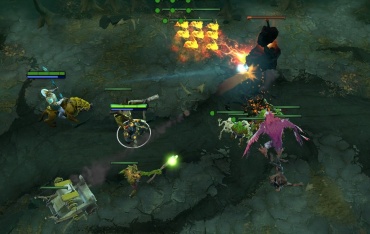 Pushing is the process of clearing enemy creep waves and building up large allied creep waves in order to take down enemy buildings rapidly.

Ultimately, pushing is necessary to win the game. Deciding when to push is a crucial part of the team's individual strategy, as some lineups reach their peak in the late game, while some lineups have the capability to finish the game very early.

Early pushes put pressure on the enemy team by forcing them to defend their towers. This is an effective way to counter carry heroes, because they require some time and farm to become effective. Killing towers is also a good way to earn gold for the whole team, as every hero gains bounty.

Pushing also serves as a counter to turtling. Enemies trying to turtle will have a hard time earning their farm if your team keeps trying to destroy the enemy's towers and creep waves. This forces their hand to defend, which usually results in an impending team clash. Most heroes push when the Tower life is low.

Pushing to the enemy, sometimes, can lead to clashing or teamfights.

Summoning abilities, such as

Nature's Call are excellent pushing abilities, as the summons can attack enemy creeps and buildings, as well as absorb large amounts of damage. Spammable AoE nukes like

Crypt Swarm can quickly take down hostile creep waves and can keep up the push in this way. Heroes with AoE healing abilities, such as

Death Pulse, can drastically boost the durability of allied creeps and sustain a push. Some abilities, like

Nether Blast, can even deal direct damage to towers.

Most pushing items provide buffs or heals to allied units, allowing creeps to deal more damage and survive longer. However, they also allow heroes to stay far away from their fountain for extended amounts of time, so they can keep up the push. Some

Arcane Boots and heals can make long trips to the fountain obsolete, so that the whole team can stay outside and gank or push. The

Necronomicon provides both a useful aura and two summoned units that can aid the push. In the later stages of the game, carries can quickly push lanes by themselves. Items that hit multiple units, like

Maelstrom can boost their ability to push the lane even more.

When the enemy team is far away from their base or dead,

Boots of Travel can be used to quickly teleport to a vulnerable lane.

Enemy pushes can be countered in different ways; most of them are very similar to pushing abilities.

To start counter pushing is one ganker of your team will try to attack the enemy hero while defending your tower.

The best counter to a push is ganking. Pushing exposes enemies the closer they get to your base, making ganks much easier to execute. Note, however, that ganking usually is not an anti-push (to prevent it from happening), but merely a good counter to it.

Long range AoE abilities, such as

Keeper of the Light's

Powershot can devastate enemy creep waves from a safe distance and significantly slow their push. Although less effective for defense, summoned units like enchanted neutral creeps can soak up some damage. The most effective defensive summons are

Plague Ward, as they are spell immune, deal enhanced damage to creeps and can be summoned in large amounts with low mana cost and cooldown.

Initiation is the most important element of starting a battle. As pushing teams are often clustered and stationary, initiating a fight against them is especially easy.

Echo Slam, coupled with a

Blink Dagger, can be a devastating ability against numerous, clustered opponents. However, other intiators or tanky heroes can be used to make the first move as well.

When playing against a pushing lineup, it is important to stick together and to not die one by one, because the enemy can quickly turn a small advantage into some tower or barracks kills. Defensive Observer Wards and moving around with all five players can prevent dangerous situations.

Nature's Prophet will often attempt to push unprotected lanes, it is extremely crucial to always carry a