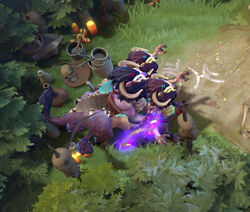 The Prowler camp was an ancient camp of neutral creeps. It contained 1 Ancient Prowler Shaman and 2 Ancient Prowler Acolytes, and gave a total of 195 experience and 168-191 gold.

Ability
No Target
Affects
Enemies
Stomps the ground, dealing damage to nearby units and reducing their base physical armor by 50%.
Cast Animation: 0.4+1.37
Radius: 300
Damage: 200
Base Armor Reduction: 50%
Duration: 6

modifier_spawnlord_master_stomp: Dispellable with any dispel.

modifier_spawnlord_master_freeze_root: Dispellable with any dispel.

Illusions can bestow the aura, but do not benefit from the lifesteal.
Modifiers

modifier_spawnlord_aura_bonus: Dispellable with any dispel.