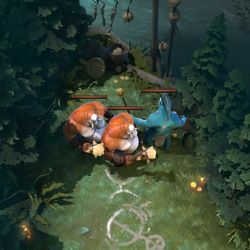 The Ogre camp is a medium camp of neutral creeps. It contains 2 Ogre Bruisers and 1 Ogre Frostmage, and gives a total of 109 experience and 64-112 gold.

Can be cast on spell immune allies.
Does not slow spell immune enemies. Slow persists if debuff was placed before spell immunity and when not dispelled.
Modifiers