New Bloom 2014 is an event lasted from January 29th to February 2nd, 2014. It features numerous rewards, as well as a new game mode where players must battle Nian, the mighty Year Beast.

Two currencies were introduced for this event.

Two boosters can be bought from the Dota 2 Store to increase the amount of Flamesalt Ingots and Jade Tokens earned. Players who own a booster also grant all other players a smaller, stacking bonus drop rate. These boosters only increase currency earned after matchmaking games, not the event game mode.

In addition to currency, players also have a chance to receive a Crimson Parcel after playing matches.

In this game mode, five players must attempt to inflict as much damage as possible to the Year Beast. The higher the damage achieved, the greater the reward. 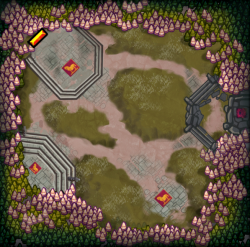 The map consists of large, simple arena. The shop is on the top left.

In this game mode, players will have their Flamesalt Ingots converted into in-game gold, which can be used to purchase special items to assist players in fighting the Year Beast. During the Year Beast's second sighting, any unspent reliable gold is lost.

Players can select a matchmaking tier that determines the amount of Ingots that each player will spend and the reward they will earn. This feature was added from the Year Beast's second sighting onwards. Selecting tiers in Practice mode require no Ingots.

Players are assigned a ranking based on the amount of damage their team dealt to the Year Beast. Different rankings grant different rewards. There are no rewards for Practice mode, but players still start out with varying amounts of gold depending on the tier selected.

Players who rank highly in amount of damage dealt to the Year Beast will receive exclusive custom couriers in Genuine quality.

Unique items have been introduced for this game mode. Item details are available on their individual pages.

Heart of Tarrasque and all items which give lifesteal are unavailable for purchase. Also,

Divine Rapier was removed at the Year Beast's fourth sighting and onward.

Players can place any unwanted cosmetic items into the Offering panel, and get a number of rewards depending on the items offered in return. Offerings are collected a total of 2 times.

Two gifts are available in exchange for offering items. Players who made greater offerings will receive multiple rewards.

This HUD skin was the default for New Bloom Festival 2014. There is no way to obtain it as a cosmetic item.

Every child knows the tale. Each year, as the dark and cold of winter turns back from its peak, wild energies that have slumbered through the long months begin to twist and pool. From this mire of eldritch power, as the first flowers begin to bloom, the Year Beast takes form to bellow its savagery and its hunger. Yet the same source that imbues the creature with terrible power also covers its being in rare materials, ready to be crafted into unique armaments if they can be pried from its body.

The comings and goings of the Year Beast are cyclical by nature. It is a mysterious creature, flighty and prone to long patrols of its strange, unknowable territory, dispersed across both space and time. For days it may disappear, perhaps tracking its predecessor across the veil of time, only to reappear refreshed and renewed, as if no time had passed at all. Those who hope to defend against the Year Beast must be both vigilant and patient, striking at those rare times when the creature chooses to reveal itself.