From Dota 2 Wiki
Jump to: navigation, search
For the hero, see

The Naga are a race of aquatic beings, with a humanoid upper body and a snake-like lower body. Like other underwater races, they are considered Meranths. The Naga may also be considered part of the Slithereen, although they appear to form a subgroup within that classification. Unlike Slithereen such as

Slardar, most Naga have more human head and facial features.

Naga live in numerous sunken cities below the waves, where a great wealth of golden artifacts are stored in places like the Deep Vault.[1] They have an elegant sense of aesthetics, and their cities are lined with ornate white pillars and statues, and lighted with magical glowing lamps.[2] 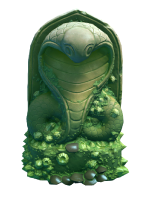 Monuments to a snake-like being can be seen across Naga cities. It is unknown what the being represents.[2]

The Naga are no strangers to war, wielding tridents, polearms, and twin blades into battle. Some make up the Slithereen Guard, where they observe a strict code of honor.[1]

The Naga are allied with the Deep Ones, defending them against pillaging armies of Levianths. At the battle of Crey, Slithice and her soldiers were able to hold back an invading army, at the cost of only one lost artifact.[1] One of their cities borders the dangerous Dark Reef prison, and it is possible that the Naga have a conflicting relationship with its denizens, as well as Maelrawn, whose icon appears to be scattered across the prison.[2]