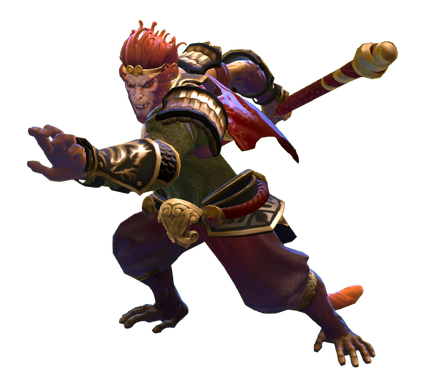 Though Monkey King is typically played as a support and ganker, it is ideal to transition into a core position as he is severely hindered by lack of farm. Therefore players often grab a

Hand of Midas as soon possible and briefly farm whenever it is off cooldown in between fights. Playing Monkey King as a carry from the start is not recommended as he is an extremely slow farmer and requires an extraordinarily good head start above the enemy team to keep up, with mediocre attack speed for an agility hero, only one true AoE ability on relatively long cooldown and fairly high mana demand, and weak damage without his passive which only works on heroes. However with enough items, Monkey King can become a force to be reckoned with into the late game, as he can be highly elusive and can clear entire creep waves with one Boundless Strike.

Monkey King's ability to roam is top tier. Tree Dance allows him to jump tree to tree with low cooldown and no mana cost. He can quickly go from lane to lane without enemies knowing, as without high ground or flying vision, they cannot see him while he is on a tree. The mobility and elusiveness from Tree Dance also allows him to place wards deep in enemy territory with little effort. When ganking, an ally with stun or slow will be of great help as it can allow him to fully channel Primal Spring. In the early game, an

Orb of Venom is commonly bought to help slow a target. Boundless Strike can be used to stun and nuke the fleeing target or other enemies attempting to counter the gank.