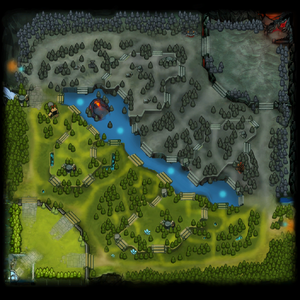 The minimap is a HUD element that represents the game map on a smaller scale. It displays in real time the location and status of buildings, heroes, creeps, couriers and wards. The minimap is subject to team vision, with unseen areas covered by the fog of war. Certain events and Terrain items can alter the appearance of the minimap.

These settings can be changed in the game options.

These four extra icons are used for

Some cosmetic items will alter a hero's minimap icon. Click on an icon to view the corresponding item.

The black background is shown for contrast, and is not part of the icons.

The Dire side icons are only used when observing a game. For players, the player's personal courier uses the Radiant style icons while allied and enemy couriers are shown as a green or white dot respectively.

Radiant wards are green/blue, and

Bounty Runes are always shown when available, while other runes are only shown when having vision on them.

The camp icons are colored yellow in-game. Roshan's icon is colored like Roshan.

Players can use the Scan ability on the right of the minimap UI to detect any enemy heroes in an area. 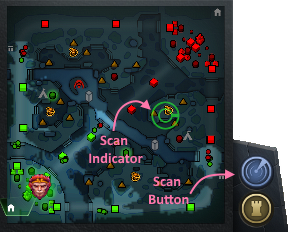 The Scan button is located on the right of the minimap

Holding down both Ctrl and the left mouse button while moving your cursor over the minimap will draw lines on the minimap. These lines can be seen by all allied players, and their color corresponds to the color of the player. Lines will fade after a few seconds.

There are several console commands that can be used to modify the minimap in various ways to match an individual player's preferences. Some of the commonly used ones are shown below.