Ability
Target Point
Affects
Enemies / Allies
Damage
Pure
Launches a bloody hook toward a unit or location. The hook will snag the first unit it encounters, dragging the unit back to Pudge and dealing damage if it is an enemy.
Cast Animation: 0.3+0.59
Cast Range: 1300
Max Travel Distance: 1300
Hook Search Radius: 100
Damage: 150/220/290/360

Followthrough: Dispellable with death only.

Meat Hook: Dispellable with death only.
The Butcher's hook is a symbolic nightmare, its curved blade a frightening reminder of his slaughterous intent.

Rot: Dispellable with death only.
A foul odor precedes a toxic, choking gas, emanating from the Butcher's putrid, ever-swelling mass.

Ability
Passive
Affects
Self
Gives Pudge increased magic resistance, as well as bonus strength that increases each time Pudge kills an enemy Hero or it dies in his vicinity. Flesh Heap is retroactive, meaning it can gain charges before it is skilled, which then become active.
Enemy Death Radius: 450
Kill Radius: 1600
Magic Resistance Bonus: 8%/10%/12%/14%
Strength Bonus per Death: 1.5/2/2.5/3 (

Flesh Heap: Dispellable with death only.
The Butcher gives new meaning to the words 'meat shield'. 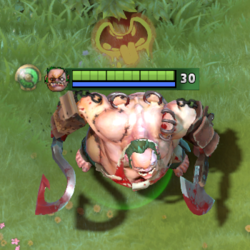 Reduces cooldown and allows targeting an ally to swallow them and heal them for 4% of their max health per second. The ally can exit whenever they want by issuing a command.
Modifiers

Swallow: Dispellable with death only.

Swallow Effect: Dispellable with death only.

Swallow Hide: Dispellable with death only.

Dismember Pull: Dispellable with strong dispels.
'When I'm through with these vermin, they'll be fit for a pie!'