Mars, the First Son of Heaven
Mars, first son of heaven, spent a long existence waging endless war, and saw countless more crusades waged beneath the banner of his old name. Wars of conquest and of vengeance. Just and unjust... Always cruel. So much like his father, Mars indulged his basest impulses--with inclinations much more monstrous than those of Zeus--and he inflicted suffering untold.

As the Fates would have it, his solution came easily: he must wage war for a larger purpose, and inspire more than mere savagery and sorrow at the sight of his crest. He must at last lay claim to the mantle of leadership that is his birthright, for the time has come to burn down the pantheon of the old age and build a just new empire atop the ashes of his kin. Only then might he find satisfaction, and make the glory of Mars evident to all.

Mars has fought in countless wars, including the Stygian Conquests, the Wightfall Invasion and caimpaigns against The Continuum. He fought against a mysterious figure named Sheragndar,[5] and was responsible for creating Quoidge as a result of his wars.[6] 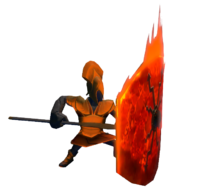 An undead warrior of the Ash Legion.

The Ash Legion, a group of supreme warriors who found thrill in combat, was slain by Mars after challenging the god to a fight. Their undead bodies now rise willingly at Mars' command, forming an Arena of Blood in which combatants can fight without interference.[7]

One of Mars' exploits involved helping a village defeat a witch, who was possessing and turning the villagers against one another. After the villagers sacrificed their last bull to Mars, he took up arms to storm the witch's fortress, killing her converted minions, and eventually slew the witch herself. The villagers returned to normal after this, and Mars expects that they rejoiced greatly with songs dedicated to Mars.[8]

Mars mentions several other gods of the Greek pantheon. His father is Zeus, his mother is Hera, his uncles are Poseidon and Hades.[9] He also makes reference to Vulcan, the god of fire and blacksmithing who forged his spear.[10][11]

He is estranged from Zeus, his father, whose pantheon he wishes to topple.[12] Because of his enmity towards his father, Mars also hates lightning, which reminds him of Zeus' thunderbolts.[13]

Aside from the Greek gods, Mars has hostile relationships with the gods of Dota 2, seeking to hunt down and kill Selemene and the Flayed Twins.[14][15] He is neutral towards the Omniscience.[16]

Mars is close with Io, describing it as his oldest friend who helped him through dark times.[17] He also has a strange desire for Black Arachnia's brood and eggs.[18]