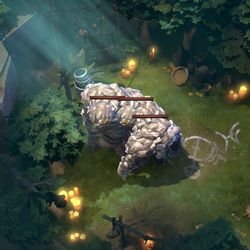 The Large Golem camp is an ancient camp of neutral creeps. It contains 1 Ancient Granite Golem and 2 Ancient Rock Golems, and gives a total of 314 experience and 156-178 gold.