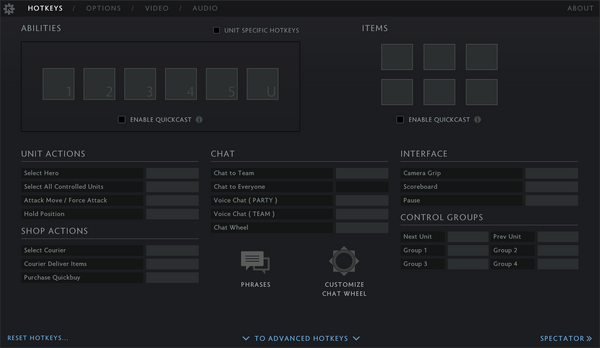 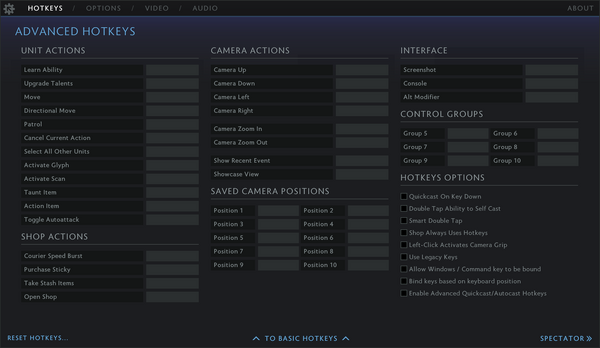 The hotkeys settings can be accessed by clicking on the little

gear icon in the most top left corner in the main menu. Here, the player can customize many hotkeys, or select one of the many pre-set hotkey templates. Almost every key on the keyboard can be bound to something, with a very few exceptions. The exceptions usually have a set purpose in the game and thus are un-rebindable.

Several hotkeys have a set purpose, which cannot be changed. This results in them mostly being un-rebindable.

Basic hotkeys are active while playing a match. The player can change the hotkeys at any time, even during a match. There are hotkeys for abilities, items, unit actions, shop actions, chat, interface and control groups. In the advanced hotkeys, there are additional settings for unit actions, shop actions, interface and control groups, and the hotkeys for camera actions, saved camera positions and some hotkey setting options.

By default, the game uses the "Arrow (Default)" hotkey layout. The player can choose from a variety of pre-set hotkey templates, which can be found by clicking on "Reset hotkeys..." at the bottom left of the settings menu. Available templates are:

1Legacy keys can also be enabled by ticking the corresponding option in the Advanced Hotkeys settings, rather than starting over with this template.

Activating a template unbinds all hotkeys used in it from their existing actions. Hotkeys can still be changed freely after selecting a template, except Legacy Keys' item hotkeys.

Ability hotkeys section. Hotkeys apply to all units by default, but can be set to use different hotkeys for heroes, couriers and neutrals. Each hero can have its own unique hotkeys set. 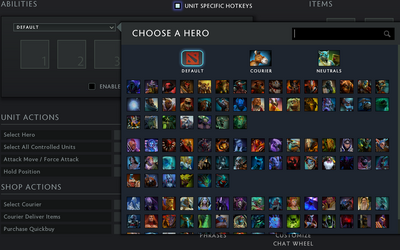 To enable unique bindings for cast, quickcast and autocast, turn "Enable Advanced Quickcast/Autocast Hotkeys" on in the advanced hotkeys section

There are 6 ability slots which can be used. If one slot is empty and contains no ability, it is not visible in-game, and all abilities coming after it are moved together. For example, if a unit has an ability in slot 1 and 3, but no ability in slot 2, then the 2nd slot is not visible and the 3rd ability is moved next to the 1st ability, so that there is no gap. However, the slots are still bound according to the settings. Despite the 3rd slot being moved to remove the gap, its hotkey is still equal to whatever is set for the 3rd slot in the ability hotkey settings.

Heroes usually have 3 abilities in their first 3 slots, and their ultimate always in the 6 slot. This causes the ultimate spell to always use whatever hotkey is set for the 6th slot, despite the ultimate visually appearing in the 4th slot. This is why the hotkey of the 4th ability on non-hero units is not equal to the hotkey of ultimate abilities. The non-hero unit has 4 abilities in its 4 slots and has the 5th and 6th slot empty, so they are not displayed. If its 4th ability would be moved to the 6th slot, it would make visually no difference, but change its hotkey to what is set in the 6th slot.

By default, the ability hotkeys apply to every unit the player controls. It is possible though, to bind different hotkeys to heroes, couriers and other units by turning "Unit Specific Hotkeys" on. It is also possible to bind unique hotkeys for each hero, however, this is not possible for other units. Clicking on "Clear" after having given non-hero units, couriers or an individual hero unique settings, sets the hotkeys back to what the player set as default. 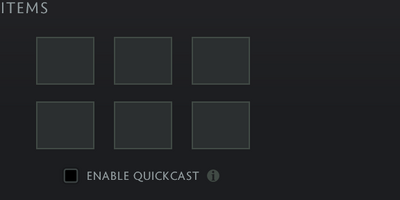 Item hotkeys section. Hotkeys apply to all inventories of units of the player.

To enable unique bindings for cast and quickcast, turn "Enable Advanced Quickcast/Autocast Hotkeys" on in the advanced hotkeys section

Just like ability hotkeys, the item hotkeys are displayed in the same order as the item slots in the HUD, the only difference being that all 6 slots are visible all the time.

Like ability hotkeys, the player can choose between regular cast and quickcast. Turning "Enable Advanced Quickcast/Autocast Hotkeys" also works for items, allowing the player to bind regular and quickcast to each item slots. Items cannot be autocast, so there are no settings for autocasting items. Item hotkeys are shared by all units under the player's control and cannot be set for each hero individually. 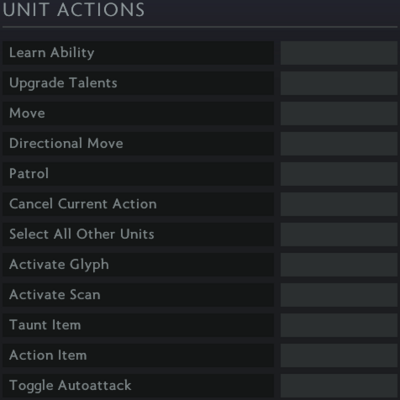 These hotkeys are for generic unit commands like attacking, moving, stopping, etc.

These keys are the assigment for unit groups. In order to bind units to a group, select the units and then press CTRL + group key. In order to add a unit to an already existing group, select the unit and press SHIFT + group key. The group assigment gets saved on the Steam Cloud, so the player does not have to re-bind the same units always to the same group for each game over and over again.

These hotkeys are for interface related things the player can do ingame, like opening the scoreboard, pausing the game, taking screenshots, etc. 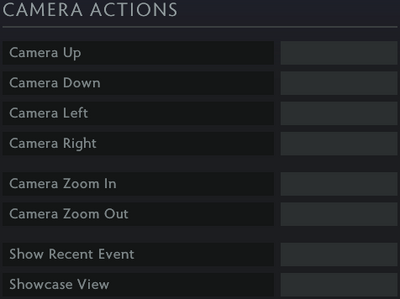 These keys are for controlling the game camera. 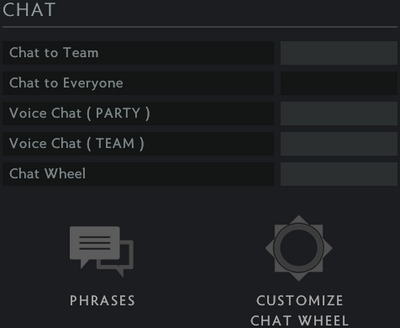 These are the hotkeys for the ingame chat. Besides hotkeys, there also is a chat wheel function and pre-listed common phrases which the player can assign keys to as well. The chat wheel and this phrases are displayed in the ingame chat upon using. 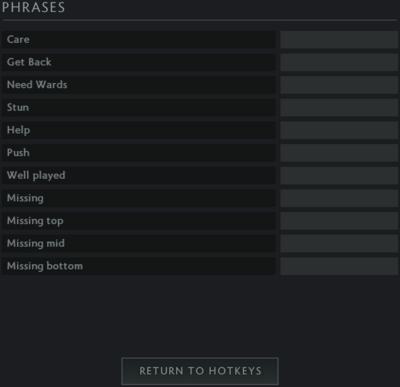 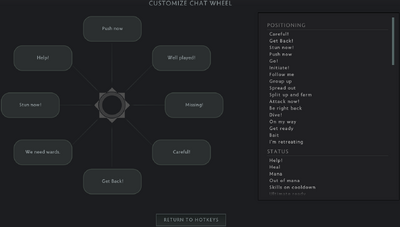 The chat phrases menu allows player to bind certain set phrases to hotkeys. Upon pressing the hotkey, a phrase will be put in the chat for your team or for everyone, depending on what phrase it is.
By default, none of the phrases are bound to any key. The chat wheel is by default empty. The player has to select the phrases manually if the use of chat wheel is desired.

All chat phrases are automatically translated to all supported languages, making it possible to communicate through languages barriers.

The set phrases are (these are unchangable): 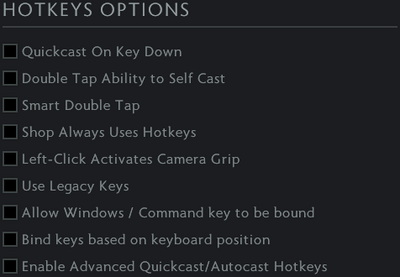 Here are several hotkeys related option and preferences the player can turn on or off, ranging from double-tap options to quickcast options and shop hotkeys 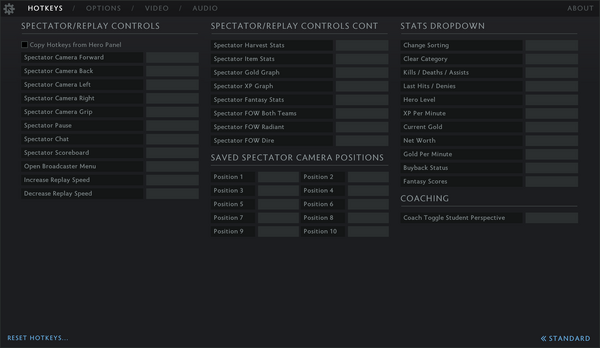 The spectator hotkeys settings can be found by clicking on SPECTATOR>> at the bottom right corner of the basic or advanced hotkey setting window. Here, the player can set hotkeys for spectating/watching replays, for the stats dropdown menu in live games or replays, coaching hotkeys and saved spectator camera positions. These hotkeys do not interfere with the basic/advanced hotkeys. While basic/advanced hotkeys are only active while actually playing a match, the spectator hotkeys are only active while spectating a live game or watching a replay.

This section covers camera movement, spectator menus and replay speed. When ticking the Mirror Hotkeys from Hero Panel box, the hotkeys for camera movement, pause, spectator chat and scoreboard will use the same hotkeys as their equivalents from the standard hotkeys settings.

These work in the exact same way as the default saved camera positions, just that these are only active while spectating or watching a replay. 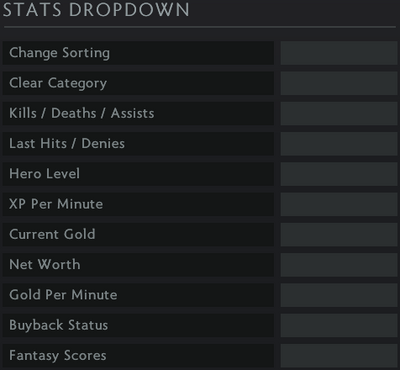 These hotkeys are for the stats (hero level, last hits, networth, etc) dropdown and their sorting. These stat windows are all sortable after the following things:

These are extra hotkeys enabled for coaches.