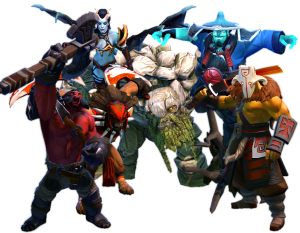 Heroes are the essential main characters of Dota 2, controlled by the players. Heroes possess the three attributes, strength, agility and intelligence, from which one is their primary attribute. They capable of leveling up through the means of experience, up to level 30, gaining additional attribute points, and ability points which can be spent to level up abilities or gain even more attributes. Heroes are also able to spend gold to purchase items.

All heroes spawn once at the beginning of the match after the picking phase, but only if the player locked in their pick.

The only heroes which spawn later on are hero clones, which can only be created by 3 heroes:

Meepo, who can gain up to 4 permanent clones of himself by leveling

Divided We Stand, which all die together when any of them dies (including the prime Meepo),

Arc Warden, who can create a temporary clone of himself by casting

Tempest Double, which expires like a regular summon, and

Monkey King, who can create an army of temporary clones with

Wukong's Command, which are uncontrollable and only attack heroes. Like heroes, these clones do not disappear when dying (or expiring). Meepo's clones respawn like regular heroes, while Arc Warden's and Monkey King's clones respawn whenever Tempest Double or Wukong's Command is cast again. These hero clones are almost fully treated like regular heroes, with a few special interactions with some spells for fairness. However, since Meepo's clones and Arc Warden's clone work fundamentally differently (Meepo clones being permanents like heroes, and death to one means death to all, while Arc Warden's clone is rather similar to a summon or an illusion), each have different unique interactions. Monkey King's clones rather act like a spell effect and cannot be interacted with in any way. They stand at set locations and attack nearby enemy heroes automatically until the spell expires.

Illusions are also hero-type units, but unlike heroes, they do not respawn, but despawn completely after dying, like other units and summons. Each spell which creates illusions spawns completely new illusions on recast. Illusions are basically hero-based summons, copying the hero, but acting like a summon.

The multi-kill banner as seen in-game.

The very first hero kill of the match, called the ▶️ First Blood!, also grants an additional gold 150 to the killing hero. A hero's bounty uses the following formula:

A hero's death has a much bigger impact than the death of almost any other unit. When a hero dies, it stays dead for an amount of time based on its level and the player loses gold based on the player's current net worth divded by 40. There is no way to directly reduce or avoid this gold loss. However, only unreliable gold is lost, reliable gold is not lost on death, meaning if a hero has almost no unreliable gold but a lot of reliable gold, dying does not cost as much as it would with much unreliable gold and little reliable gold. Dying also results in the loss of any ongoing killing streak the hero has. Heroes do not lose experience on death. As mentioned before, a death also grants gold and experience to nearby enemies and the killer. However, gold and experience is only granted to the enemy, and streaks are only lost when dying to an enemy.

Dying to neutral creeps, or getting denied by an ally or oneself neither grants the enemy any bounty, nor ends the current killing streak. Dying to a neutral creep results in a minimum death time of 26 seconds.

After the first spawn, a hero does not spawn again. However, what heroes do instead is respawning. After a hero dies, it comes back to life after an amount of time based on its level. The maximum respawn time is reached on level 25. Upon respawning, the hero gets instantly moved to the fountain area, with its health and mana reset. Cooldowns are unaffected and buffs and debuffs are not cleared upon respawning.

Several abilities and items are able to affect the respawn timer and the respawn location.

When affected by respawn time changing effects, the buyback penalty is applied first, followed by

Aegis of the Immortal always set the respawn timer to their values, disregarding any reducing or increasing effect.

Furthermore, dying to neutral creeps sets respawn time to a minimum of 26 seconds.

The respawn times can be seen in the following table.

Buyback icon, located below the hero icon after a buyback
▶️ Buyback stinger

While dead, the player has the option to use "buyback", spending money in order to instantly respawn at the fountain. However, the buyback ability has a long cooldown of 480 seconds and has a scaling gold cost. Buyback takes away from reliable gold first, which allows the player to ensure a buyback by accumulating enough reliable gold which is not lost on death. It has a base cost of 100 gold, a scaling extra cost based on the hero's net worth, using the following formula :

Besides the potentially high gold cost, buyback also increases the next respawn time by 25 seconds.

Due to the high cooldown, high gold cost and heavy penalties, using buyback should be a thoroughly thought through action, as it can backfire and cause more harm than good. Scenarios where a buyback may be a good idea is when a crucial team fight starts while one is dead, in order to join the fight. Another crucial moment is when the base needs defending, or when having died during a team fight which your team still won and is going for a final push. Buyback should generally not be used to skip death timing to farm, as the gold cost is usually too big to make it ever worth it. Also, the death time penalty gets added on the next death. Especially on high levels, an early or ill-fated buyback can easily lead to a 120 seconds or longer death time on the next death.

Cooldown and lack of gold are the only things able to prevent a buyback. 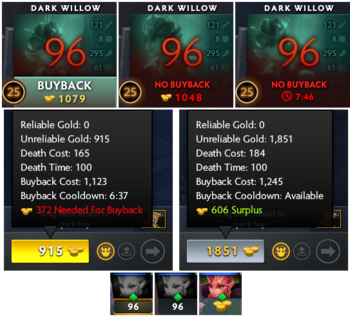 Buyback status is displayed in 3 different locations, on the HP bar while dead, in the gold tooltip at any time, and below the hero icon while dead

The buyback button is only accessible while dead. It is located on the right side of the death bar. The death bar replaces the HP bar while the hero is dead and shows the respawn time. On its right, the Buyback button is located. The button has 3 different statuses: Ready, not enough gold, and on cooldown. When ready, the button is grey and heightened. On the button, it reads "BUYBACK" in white, and it also displays the current buyback cost. When having not enough gold, the button is red and pushed back. The "BUYBACK" text turns red, and it still displays the current cost. When on cooldown, it looks like when having not enough gold, but the gold cost is replaced by a cooldown timer, showing the remaining cooldown.

The buyback status can also be seen by allies, below the hero icon at the top bar. If the flag has a golden border, that hero has buyback ready and can use it. If there is no golden border, the player has either not enough gold, or it is on cooldown. Like the death bar, this is only visible while dead.

Lastly, the buyback status is also displayed in the gold tooltip, which can be accessed by hovering the mouse over the gold. It displays the currently required amount of gold for the buyback, its cooldown status, and how much gold the player still needs for the buyback, or how much surplus gold they have.

When a hero buys back, a string sound plays (▶️ buyback sound) which is audible to everyone, and a gold symbol appears below the hero's top bar icon, which stays there for several seconds, visible to everyone. The hero also responds to the buyback. Unlike their responses on a regular respawn, which are only audible to the player, a buyback response is audible to everyone. This means no matter what setting a player uses, there is always a cue revealing that a hero bought back. 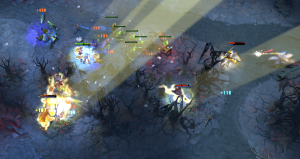 Several heroes leveling up, indicated by the light beam on them
▶️ Level up sound
Main Articles: Experience and Abilities

Every hero starts off at level 1 and can level up 29 times, up to level 30. Each new level grants the hero some attribute points (different values for each hero). Ability points are gained up to level 25 which they can use to level up abilities or a talent. Some abilities require the hero to be on certain levels to be learned or leveled up further. Most basic abilities have 4 ability levels and can be leveled on level 1, 3, 5 and 7. Talents can be upgraded at levels 10, 15, 20, and 25. Ultimates usually have 3 levels and can usually be leveled up at level 6/12/18. The exceptions are Meepo, who requires different levels for his ultimate, and Invoker, who has unique different ability scheme.

Heroes level up through the means of experience, which is gained by killing enemy units, or by being within proximity of an enemy unit while an ally kills that enemy unit. The required distance to gain experience is 1300 if the kill is not done by the hero, or if the killed unit was not a hero. Killing other heroes always grants experience, regardless of distance. When multiple heroes are within range of an enemy unit which gets killed, the experience gets evenly split among the heroes. This includes every single clone of Meepo, but excludes Arc Warden's Tempest Double. If a hero is already on max level, it still gets its share of experience when within range, even though it has no use for it anymore, causing it to get wasted. A hero cannot gain and does not get its share of experience while dead.

A level up is indicated by a visual effect, an angled yellow light beam from the sky shining on the hero. This light beam is visible to everyone. A sound effect is also played, which is only audible to the player.

Just like any other unit type, the hero unit type causes several different interactions with abilities. Some abilities cannot affect heroes at all, while others have altered effects or different values when used on heroes.

The following abilities cannot be cast on, or cannot affect heroes:

On the other side, these abilities can only target or affect heroes: