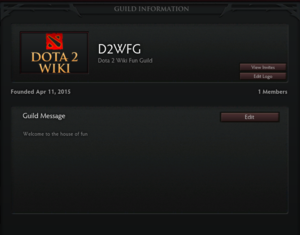 A guild is an organization of players that can chat and form parties together. Guilds can be created and accessed in-game from the Community tab. A player may be in up to four guilds at once. Guilds no longer exist in the Source 2 client.

Every guild has a unique name, counting guilds that have already been disbanded. Guilds also have a tag/abbreviation and an image, which are shown in lobbies and scoreboards. A guild message can also be created; it is displayed on the guild's info page. The guild message and guild logo may be changed at any time. To invite a player to a guild, click on their name in your friends list, match summary screen, or chat channel, and select Invite to Guild. If an invited player is offline, they will receive the invitation the next time they open Dota 2. The founding player is automatically promoted to Guild Leader, and any invited players start out as Member. A guild is automatically disbanded when the last player leaves.

A party that is not full may opt to open their party to the guild, and members of that guild may join any opened parties. On the dashboard, you have access to one chat channel for every guild that you are in. You can interact with other guild members (view profile, add friend, invite to party, trade, etc) through the member list. Guild members can see unprotected lobbies belonging to other guild members.

There can be multiple guild leaders who cannot demote nor remove each other.
Each rank in a guild grants special privileges: