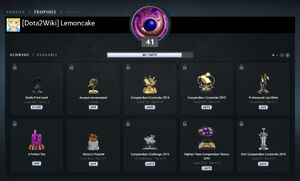 Trophies are records of a player's in-game achievements, acquired by performing various feats and participating in Events. Collecting trophies will earn points and Dota levels, which unlocks new icons for the player's profile.