Skeleton King has been removed for this event, but was resurrected as

Wraith King's Altar. The final wave is a battle with the resurrected Wraith King himself. 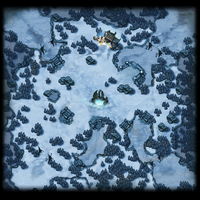 There are 13 waves in this mode. Each wave has its own name and several different creeps as well as tougher mini-bosses.

Enemies will spawn in waves from 5 possible areas: Near the 4 enemy towers, and an alternate path south.

After completeing each difficulty, players will be presented the chance to restart the game mode from the next difficulty tier.

Players do not respawn upon death. Instead, players can be revived in two ways.

Unique in-game items have been added for Wraith-Night.

Some existing items have been changed.

The Awakening of the Wraith King[edit]

Each soul collected during Wraith-Night will count towards the Wraith King's global resurrection. When the goal has been reached,

Wraith King himself will be available in the game, taking place of