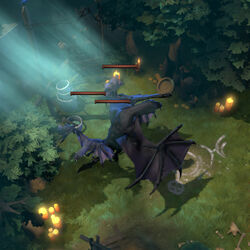 Ability
Target Area
Affects
Enemies
The Black Dragon hurls a fire blast on the ground, igniting the area in a 300 radius for 10 seconds. Enemies caught in the fire will take 85 damage per second.
Cast Animation: 0.3+1.1
Cast Range: 1000
Radius: 300
Damage per Second: 85
Duration: 10

modifier_black_dragon_dragonhide_aura_bonus: Dispellable with death only.

Fireball
The Black Dragon hurls a fire blast on the ground, igniting the area for some time. Enemies caught in the fire take damage per second.

Dragonhide Aura
The Ancient Black Dragon's dreaded presence grants nearby allies additional armor. This bonus can stack with itself.