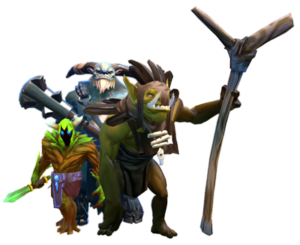 All Creeps (including Super and Mega creeps) and summons have a damage increase of 6% per minute against heroes and buildings. The damage caps at +180% at 30 minutes.

Currently, neutral creeps do not experience a change in their skills.

Neutral creep bounties increase by 7% every minute. This value is affected by the global gold multiplier setting.

Roshan is now significantly stronger, with a large array of abilities and getting more powerful as time passes. With each passing minute, his health regeneration increases by 3, armor by 0.25 and attack damage by 2. He is able to summon 2 Roshlings which also get stronger as the game progresses. Roshan no longer has spellblock, instead he gains increased armor and attack speed as his health decreases. When cornered, Roshan will unleash his ultimate attack, a powerful shockwave which deals high magic damage and pushes all enemies out of his cave, while disabling them. The damage of all Roshan's abilities increase with game time.

Hence, players should take caution in facing Roshan, with ample preparation and teamwork.

The Aegis of the Immortal has been reworked significantly. It no longer consumes an item slot and instead is applied as a buff to the hero that picks it up. Upon being lethal damage while carrying an Aegis, the Aegis' bearer will no longer die and resurrect; instead, they will become untargetable, invisible and invulnerable for 3 seconds, after which they will regenerate all their health and mana. Otherwise, it will instantly heal its owner completely upon expiring, 7 minutes after being picked up.

Cheese can be stacked, used on allies, and completely heals its target. At his second death, Roshan drops Cheese. Each successive death results in an additional Cheese being dropped.

Roshan will always respawn exactly 8 minutes after being killed.

Bashed: Dispellable with strong dispels.
Roshan's powerful blows can stop even the mightiest heroes in their tracks.

Roshan Slam: Dispellable with any dispel.
Many have tried to overwhelm Roshan with numbers before. Not the best idea.

90
When in need, Roshan summons future, not fully mature versions of himself to help in battle.

Rage of The Immortal

Fury of The Immortal

Fury Of The Immortal: Dispellable with any dispel.
As his brothers rally to battle, Roshan's power grows.

Bashed: Dispellable with strong dispels.
The Roshlings can hit nearly as hard as their brother.