All buildings grant multiplied gold bounties based on the game's global setting. Bonus gold is only granted to the hero that deals the last hit on a structure.

A tower with 4 skills, able to hold Mega Creeps

Towers now have a 400 base experience bounty, of which can be multiplied by the global setting.

Towers may gain random custom abilities when the appropriate game setting is enabled. All tower abilities fully stack with each other.

Towers may also improve their abilities if the appropriate game setting is enabled. When a tower is destroyed, a splash message visible to all players will appear and a sound is played, indicating that all towers on that team have been upgraded. Each tower that is destroyed increases the tower "level" by one, leveling up their current ability by one. When a destroyed tower causes the abilities to reach level 3, a new skill is learnt by all towers in addition to the first. These skills can level up as well, following the same rules as above. The last tower will have 3 level 3 abilities and 1 level 2 ability.

The first ability of all towers is mirrored by both teams. This means that Dire's Tier 1 Bottom Tower has the same first ability as Radiant's Tier 1 Top Tower. However, subsequently gained skills are not mirrored.

Melee Barracks have a 400 base experience bounty, of which can be multiplied by the global setting.

Ranged Barracks 200 have a base experience bounty, of which can be multiplied by the global setting.

To make achieving the goal of destroying the enemy Ancient harder, Ancients now receive multiple buffs and abilities that trigger when certain criteria are met. Ancients now gain a flat 15 armor bonus at all times, for a total of 30 armor. Ancient health has also been increased to 7000.

When the Ancient is first damaged, Poison Nova is cast. Subsequently, when its health falls;

Ancients use their abilities when there is an enemy within 600 range, or if they receive an instance of damage from any range.

Ability
Passive
Affects
Self
The Ancient will use various abilities in self-defense as its health falls.
The Ancient stands. tall and mighty, seemingly indestructible.

Ability
No Target
Affects
Enemies
Damage
Magical
A spreading ring of poison that does damage over time to enemy units around Venomancer. Poison Nova cannot deal lethal damage; targets will be left with at least 1 health.
Radius: 1500
Duration: 20
Damage: 120

Poison Nova: Undispellable.
In the Acid Jungles, creatures releasing noxious poison to their attackers is common; Venomancer spreads this plague beyond the Jidi Isle.

Overgrowth: Dispellable with any dispel.
Rooftrellen calls the ancestral spirit of nature, releasing its power through all of his kin.

Eye of the Storm

Eye of the Storm: Undispellable.
Ride the lightning.

Ability
No Target
Affects
Self
When activated, all damage dealt to you will heal instead of harm. Most negative buffs will also be removed. If the ability is not on cooldown, it will automatically activate if your health falls below 2800.
Health Threshold: 2800
Duration: 5

Borrowed Time: Undispellable.
The most unnatural of all the gifts of the Font of Avernus, this power defies mortal understanding. What should hurt, instead heals; and what should kill gives strength anew.

Ravage: Dispellable with strong dispels.
Calling to the abyssal god Maelrawn has resulted in entire armadas being lost at sea.

To prevent fountain camping, each Fountain has a 1400 attack range and flying vision, +100 attack speed, passive Grevious Wounds (a skill similar to Fury Swipes), and every enemy unit in 1800 range is bashed whenever the Fountain attacks. A glowing marker on the floor indicates the range in which the fountain can attack enemy units. Mirana's Shooting Star is not able to enter the enemy fountain.

Fountains also now heal for 5% of max health and mana, an increase from the normal 4%. This would mean one can heal completely within 20 seconds in the Fountain. 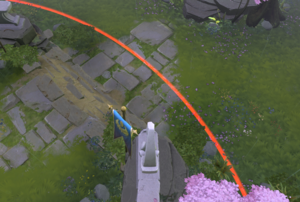 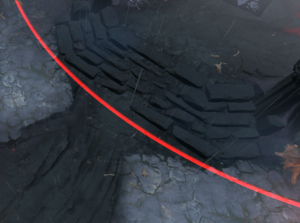 Lua error: Error in "where" parameter: the string "#" cannot be used within #cargo_query..

Ability
N/A
There is no description for this ability.