A dispel is the term used for a forced removal of status effects. Dispels usually come together with other mechanics and are rarely seen as a primary mechanic of a spell or item. 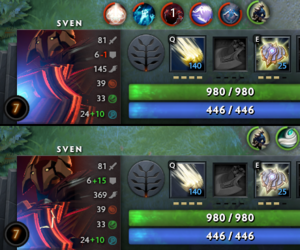 Dispels remove status effects based on whether the casting unit is an ally or an enemy, and whether the status effect is positive or negative. Applying a dispel on an allied unit only removes negative effects (also known as debuffs). Positive effects (known as buffs) are never removed. Vice versa, applying a dispel on an enemy unit only removes buffs, debuffs are not removed.

There are 3 different variations of dispel: basic dispel, strong dispel, and death.

Strong dispels are capable of removing everything a basic dispel can remove. On top of that, these can also remove many more status effects, including hard disables. Whether or not strong dispels can remove positive effects is unknown, since there is no source of strong dispel which can be applied on enemy units.

Death applies the ultimate dispel on units. It removes almost everything. Only a few effects are not dispelled by death.

Generally, all buffs and debuffs placed by auras are not removable with dispels. Their effects only disappear when getting out of range, their source disappears or when no longer meeting their requirements. However, almost every aura's buff/debuff lingers for a short time (usually 0.5 seconds). Only a few aura effects end immediately when their source dies or disappears.

Other permanent effects have inconsistent behaviors with dispels. Some of them cannot be removed, while others can. However, since they are permanent effects, they almost immediately reapply their buffs/debuffs when it gets dispelled.

1 Affects buffs and debuffs alike, no matter who the targets or sources are.

3 Requires a talent to be chosen.

4 Only available to level 3 archers.

2 Requires a talent to be chosen.

As mentioned before, it is only possible to remove buffs from opposing units. Buffs cannot be removed from allies, regardless of the type of dispel, except by death. Due to this rule, and the fact that there are no strong dispels that can be cast on enemies, there is no way to determine which positive buffs are removable by strong dispels. As such, this interaction is excluded from the list.

A list of buffs which can or cannot be dispelled can be found here.

These are all debuffs placeable by units and items. Same rule applies here, debuffs can only be removed by allies of the affected units.

A list of debuffs which can or cannot be dispelled can be found here.