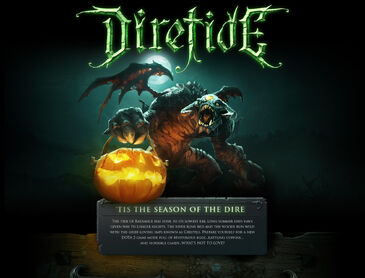 Diretide 2012 was a Halloween event that began on October 30th, 2012. It introduced a new game mode, as well as the Greevil courier.

There are 3 stages to Diretide, each lasting 10 minutes.

During the Diretide event, all players will receive a Greevil Egg after successfully defeating Roshan in Diretide. Once received, the Egg may be imbued with one of several Essences.

The fastest teams on the servers to kill Roshan received the very rare Golden Baby Roshan.