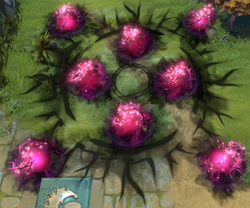 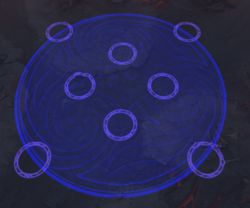 Ability
Target Area
Affects
Enemies
Damage
Magical
Dark Willow creates a maze of brambles that grow in the target area after 0.5 seconds. Enemies that walk into a bramble are rooted and take damage over time.
Cast Animation: 0.3+0.8
Cast Range: 1100/1200/1300/1400 (

modifier_dark_willow_bramble_maze: Dispellable with any dispel.
The fae realm exists all around you, merely waiting to draw you in…

modifier_dark_willow_shadow_realm_buff: Dispellable with death only.

modifier_dark_willow_shadow_realm_buff_attack_logic: Dispellable with death only.
What you can't see will most definitely hurt you.

Ability
Target Unit
Affects
Enemies
Dark Willow casts an ancient fae curse on the target. After a delay, the target and nearby enemies are stunned.
Cast Animation: 0.2+0.83
Cast Range: 600/625/650/675 (

Cursed Crown creates four brambles around the target after the counter ends. Triggers even upon dispel. Reduces cooldown by 3 seconds.

modifier_dark_willow_cursed_crown: Dispellable with any dispel.

modifier_stunned: Dispellable with strong dispels.
Didn't anyone ever tell you? Never strike a deal with a fairy…

modifier_dark_willow_bedlam: Dispellable with death only.

modifier_dark_willow_creature_invulnerable: Dispellable with death only.
You'll have to excuse my friend Jex. He's really into murder.

Ability
Target Area
Affects
Enemies
Dark Willow releases her pet wisp to terrorize her enemies. After a short delay, all enemies in the target area become fearful and run toward their home fountain. Terrorize cannot be used while Bedlam is active.
Cast Animation: 1+2.57
Cast Range: 1300 (

modifier_dark_willow_terrorize_thinker: Dispellable with death only.

modifier_dark_willow_creature_invulnerable: Dispellable with death only.

modifier_dark_willow_debuff_fear: Dispellable with any dispel.
You think you know the first thing about fear? Jex'll show you what that word truly means…