Damage block is a mechanic that reduces physical attack damage a unit takes by a flat amount. Most damage block abilities are chance-based and passive. 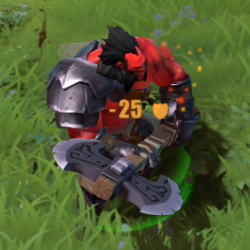 When damage block triggers, it blocks damage before other damage reducing effects do. This means that the higher the unit's armor is, the less effective damage block gets. See final attack damage for the complete calculation.

All chance-based sources of damage block use pseudo-random distribution.

All melee heroes have innate damage block by default, having a 50% chance to block 16 damage.

The following spells' damage is blocked by damage block.

1 Only returned/reflected physical damage is blocked. Magical and pure damage is not blocked.

When a damage block occurs, a ocre-colored negative number pops up on the blocking unit, with a shield icon on the right side of the number. This number shows the exact amount of damage blocked.

The proc chances of all sources of Damage Block work independently from each other. However, when multiple Damage Block sources proc on the same attack, only one of them actually blocks damage, the one with higher block values getting prioritised, while the others do nothing. This results in a diminishing stacking behavior.

Example:
When having two

Poor Man's Shield and one

Vanguard, the chance of blocking damage from non-hero attacks becomes: