Creep Stacking is the process of drawing neutral creeps away from their camps in order to increase the number of units in an area. Generally, neutral creeps will spawn in the first minute of the game and at every minute thereafter. So 1:00, 2:00, 3:00 etc. However, new creeps cannot spawn if a unit such as a player or a ward is present within the camp's boundry. By pulling neutral creeps beyond their camp boundaries, the game will generate a new set of creeps for the player to interact with in addition to any remaining creeps. This is incredibly time efficient, since it effectively increases the amount of gold available for a team. In many cases, a support who has stacked a substantial amount of creeps can build a sizable chunk of gold for not only their fellow teammates but also themselves for getting stacking bonus of 35% of the bounty. However, this can work against you if the enemy team reaches your camps first and neither will the stacker get the bonus bounty.

To stack a camp, you can either attack a unit in the camp or simply walk close to it. The neutral creeps will then attempt to chase you for a few seconds before returning to their initial position. Most camps can be stacked at around the 54-55 second mark. However, this timing varies depending on the spawn box size and the type of units involved. If done correctly, a new set of creeps will spawn at the minute mark.

The above method can be done multiple times, but the timing might start to differ. This is because some creeps have auras which affect movement speed, and they can get in each other's way. Furthermore, all neutral camps can be stacked indefinitely; as long as all the creeps have escaped the camp boundaries.

▶️ By the forge of creation.
This section is under construction. It may still lack crucial information or contain unvalidated statements.
You can help by coordinating with the authors and offer your help.

These images show the boundary boxes that the creeps cannot be in for a stack to occur. Click them for a larger size.

It's always best to practice stacking as the hero you want to play before joining an actual match. The time at which you need to stack the camp will vary because of which camp type it is (different camps have differing lengths that the creeps will chase you), what neutrals are currently in the camp (some move faster than others, and some won't leave until your hero gets out of their attack range), the attributes of your hero including their attack range if you're attacking to get the creeps attention.

Each camp has a "Base Stack Time". You will need to modify this based on your situation in the following ways: 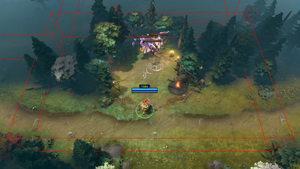 The invisible camp boundaries go upward, as well as across the map

Certain heroes can stack creeps very quickly, such as Tinker and Clockwerk. With careful positioning and timing, Tinker can stack multiple camps at once using

March of the Machines.

Rocket Flare can block a camp or stack it from anywhere if Clockwerk damages the creeps.

By using ranged abilities, some heroes can attack and stack creeps at little to no risk. For example, Alchemist, Medusa, Bristleback, and Beastmaster can attack ancient camps at a distance using

Although quite difficult to pull off, lane creeps can be used to absorb most of the damage dealt by a neutral camp. To do this, pull a neutral camp toward incoming lane creeps such that the incoming wave gets drawn toward the jungle. With careful timing, the camp will stack and the lane creeps can even be pulled toward harder camps which normally wouldn't interact with the incoming wave. If done incorrectly, any remaining creeps will venture back into the lane and eventually push out the creep equilibrium.