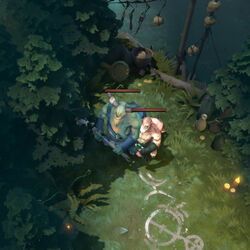 The Centaur camp is a medium camp of neutral creeps. It contains 1 Centaur Conqueror and 1 Centaur Courser, and gives a total of 121 experience and 69-81 gold.

Illusions can bestow the aura, but are not affected by the magic resistance.
Modifiers

Cloak Aura
This creature protects its allies with a Magic Resistance aura. Creeps are better protected.