From Dota 2 Wiki
(Redirected from CLG)
Jump to: navigation, search 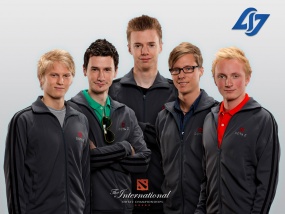 Pajkatt, Lacoste, Mirakel, Akke, and MiSeRy at The International 2012.

Counter Logic Gaming (CLG) is an American based electronic sports organization founded in 2010, and is well known for their League of Legends division.

In February 2012, CLG picked up Swedish team exPerience, with Loda as captain. However, after SLTV StarSeries Season One, in which CLG placed third, smulgullig left the team to focus on his studies, and Loda moved from Sweden to Singapore, where he joined Team Zenith. They were subsequently replaced by MiSeRy and Lacoste from Evil Geniuses.

In October 2012, Pajkatt and MiSeRy left to join the LGD.int team. The team disbanded later that month.